Brian McDonald joins High Point University (HPU) as Associate Director of HPU’s Survey Research Center (SRC). He brings more than 10 years’ experience in telephone interviewing, survey research and data analysis to this role. He has worked as a consultant on several projects for the SRC since 2010 such as serving as a resource on the WinCati interviewing system, training key staff, and supervising interviewing staff on the 2012 national post-election survey.

Previously, Brian served as the Evaluator on a Race to the Top grant awarded to Guilford County Schools and as the Director of Market and Survey Research at a consulting company serving small private colleges and universities. In that capacity he moderated focus groups, developed research instruments, and was involved in projects involving market, enrollment and retention research.

Originally from Ohio, he earned his B.B.A. and M.B.A. from Kent State University. Before moving to North Carolina in 2008, he was the Program Director of the Survey Research Lab at Kent State University, an 18-station mixed-mode computer-assisted telephone interviewing lab. During his tenure, he managed a staff of undergraduate students that collected data on a variety of topics on over 50,000 respondents nationwide.

While Brian has contributed on several research and survey efforts, his expertise is in the areas of applying statistical techniques in the collection, preparation and analysis of data. His knowledge of the principles, processes, and methods of survey research will serve him well in his role at HPU.

HPU Poll: COVID-19 and the Economy are the Most Important Problems for the Count…
read more

The latest #hpupoll has post-election findings....

In the latest @HPUSurveyCenter #poll, #COVID19 and the economy are the most important problems for the country. More: https://t.co/K16GlhOw3k 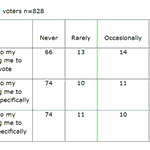 #hpupoll Also in the memo (p 8), North Carolinians are split on which party they think will control the U.S. Senate in January. Full memo with methods: https://t.co/DeV7aw1IyU 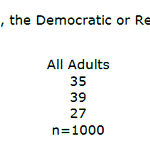