After completing his graduate coursework, Martin worked as an Analyst for the international and corporate team at Greenberg Quinlan Rosner Research, a political consulting firm based in Washington, D.C. His assignments included managing nationwide surveys, focus groups, and in-depth interviews in the U.S., Eastern and Central Europe. Martin focused on education and health care policy at his most recent job as a Survey Researcher for Mathematica Policy Research, Inc. HPU Poll: Most North Carolinians Have Responded to the 2020 Census
read more
View All

The remote poll surveys ended up involving 50 students in 17 states.

One item used to put together the #hpupoll's NC Consumer Sentiment Index is about personal finances (just like the national version from U of Michigan). Note that this is a relatively strong "better off" number. Full memo (with time series): https://t.co/Blh0DA4rCC 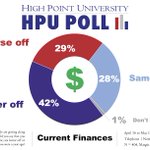 And here is a graphic to go with NC Consumer Sentiment Index numbers. Lower, but not like 2010 - 2011. Memo with methods (and time series): https://t.co/Blh0DA4rCC 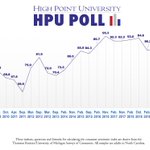 Twitter
Load More...
HPU SOCIAL
Connect with us
JOIN THE DIALOGUE
On the Social page, you can view all of High Point University’s social media feeds, connect to specific majors and schools on Facebook, and get the latest updates about what’s happening on campus.