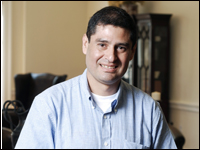 The annual event is a simulation of the United Nations General Assembly and its different committees. This year’s educational event was attended by more than 100 universities from all over the United States and several other countries.

Honores explains that the simulation is set up to re-create historical and very significant international assemblies. Also, the annual event re-creates “international meetings” from the remote past, such as the Roman Empire cabinet during the Imperial period.

“These delegations represent a country of Non-Governmental Organizations (NGOs),” Honores says. “In the case of High Point University, our delegation was made up of five students who each represented a different NGO.”

Honores says the event most certainly proved to be a valuable educational experience for the students. In fact, Abad, the lead delegate for the HPU group, received an “Honorable Mention” for her participation.

“I think that there are two basic points of this event for our students,” Honores says. “First, they learn to negotiate and promote their objectives and principles. … Second, students learn to see the world as a global and complex community, with many diverse interests. One of the important contributions of the HNMUN is to present the diversity of agendas of countries and their governments. (The experience) was very valuable. It is very important in their formation and promotion of humanistic values.”


At High Point University, every student receives an extraordinary education in a fun environment with caring people. HPU, located in the Piedmont Triad region of North Carolina, is a liberal arts institution with more than 3,400 undergraduate and graduate students from more than 50 countries and more than 40 states at campuses in High Point and Winston-Salem. It is ranked by US News and World Report No. 5 among comprehensive universities in the South and No. 1 in its category among up-and-coming schools. Forbes.com ranks HPU in the top 6 percent among “America’s Best Colleges.” The university offers 66 undergraduate majors, 40 undergraduate minors and seven graduate-degree majors. It is accredited by the Commission of Colleges of the Southern Association of Colleges and Schools, and is a member of the NCAA, Division I and the Big South Conference. Visit High Point University on the Web at www.highpoint.edu.