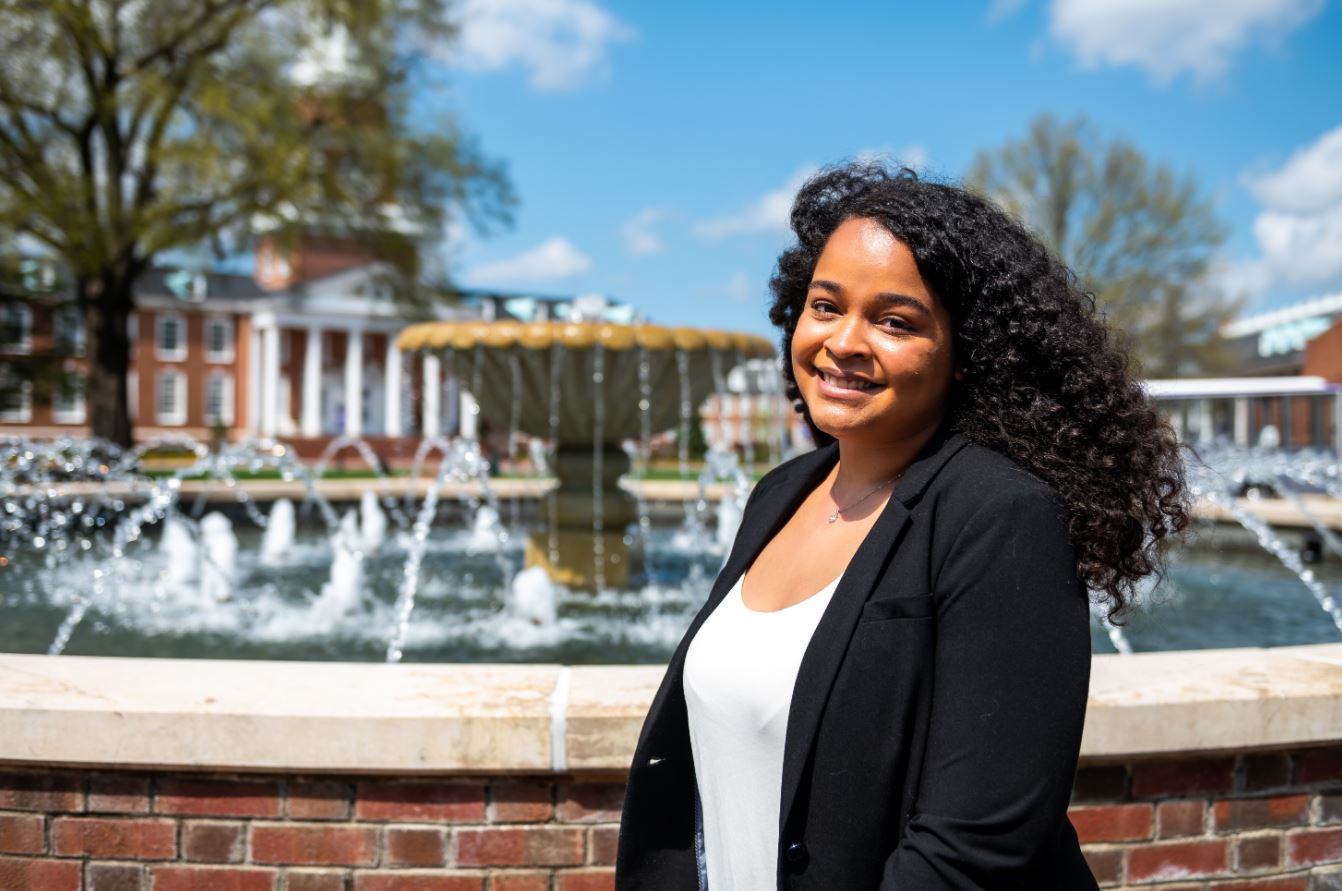 She still can’t get it out of her head.

It’s the Bible verse from Luke 12:48: To whom much is given, much is required. But she didn’t know those eight words came from the Bible. She spotted them when she was a freshman at High Point University. She walked into the Hayworth Fine Arts Center to attend the Life Skills Seminar taught by HPU President Dr. Nido Qubein and looked up.

Right beyond the entrance were those eight words.

She thinks about those words today because the New Testament verse encapsulates her personal mission since coming to HPU. She’s helped create the university’s first two Latinx student organizations, studied abroad in Chile for HPU’s 2019 Maymester Program, and has become an important voice for diversity and inclusion on campus.

And she’s writing a book to be released in summer 2021.

Nia Rainer, a junior from Queens, New York, and the recipient of the National Puerto Rican Day Parade Scholarship, is one of two Extraordinary Leaders for the month of April.

She titled her book, “Rise” In at least 10 chapters, she digs into the importance of being passionate about who you are and the need to help others around you regardless of the challenges you face.

Rainer knows of what she writes. It’s far more than helping people pronounce her first name. It’s NE-a. It’s bigger than that. Rainer needed to find out who she really is.

HPU helped her make that discovery.

The Importance of One Conversation

Rainer was raised by her mom and her maternal grandmother. They’re both strong women, both big influences in her life.

Her grandmother, Gloria Estrada, came to New York City in her 20s from Puerto Rico. She didn’t speak a word of English. She learned it, perfected it and became a Spanish teacher in a middle school. Rainer’s grandmother is now 75, a retired teacher. Rainer calls her “Vela.”

Her mom, Julie, received an associate degree from a local community college and now works for the federal government.

Rainer represents the first generation of her family attending a four-year college. She’s proud of that. Yet, the older she got, the more she struggled with her own identity.

“I’m a blend of cultures,” she says. “My dad is African American, my mom is Puerto Rican, and I loved my upbringing. But when I was young, I had a little identity crisis. I had people tell me, ‘You’re not Black enough,’ and others say, ‘You’re not Latina enough,’ and I struggled with finding out who I was.”

She attended the Frank Sinatra School of the Arts in New York City, and she got in because of her voice. She can sing. At the Sinatra School, she became classically trained in opera performance. She performed with multiple choirs and performed in various operas singing in six different languages.

When her college search began, she immediately thought of New York University. But one of her family’s friends, Anna LoMonaco, told her to consider High Point University. That was where her son, James, went. James graduated in 2013, and he now works as a program manager for Google in New York City.

“I don’t want you to apply to NYU until you look at High Point,” LoMonaco told Rainer.

“Why is that?” Rainer asked.

HPU: A Place of Discovery

Rainer drove down from New York City with her mom for an Open House at HPU. That’s all it took.

“Right then, I understood why Anna said that,” Rainer says. “It’s beautiful. But it’s more than that. High Point University has this huge emphasis on mentorship, and as soon as I was talking to people on campus, I saw that.

“Also, people wanted to remember my name. My name is difficult to pronounce, but when they got it, people would say, ‘That’s a beautiful name,’ and I started asking them about the programs. I knew then that this was a place I could work on myself.

“New York City has so much noise and so many people that they forget who you are, especially in high school where everyone wants attention. But here, I’d walk into a gas station and someone would say, “Good morning,’ and everywhere I went emphasized community, especially at High Point.”

But it’s more than finding what Rainer calls “Southern charm.”

“I’ve always been hyper-independent,” Rainer says. “I never asked for help. I tell people, ‘I got it! I got it!’ But here at High Point, I learned the importance of asking for help.”

Rainer pauses. She begins to cry. She composes herself and starts again.

“It all gave me a sense of relief,” she says. “I didn’t need to figure out everything on my own.”

She got help her first week on campus. She went to the Activities Fair in the Slane Student Center and found her community.

She met two young women who were interested in starting a chapter of Latinas Promoviendo Communidad/Lambda Pi Chi Sorority Inc. on campus. Known as LPC, the sorority is a Latina-focused Greek organization meant to increase the visibility of the Latinx community on and around campus.

Rainer had no idea what a sorority was. But she liked the idea of promoting culture. Her grandmother did that as the president of the tenant association at her apartment complex. She always took Rainer with her to the events she organized.

So, LPC’s mission brought some familiarity to an unfamiliar place. Rainer went to an interest meeting, and she was surrounded by at least dozen HPU students, majoring in everything from education to biology. They all were interested in joining the sorority because of their roots. Immediately, Rainer felt comfortable.

“This felt like home,” she says today. “We embraced who we were.”

Rainer became a founding member of the Alpha Zeta chapter of Latinas Promoviendo Communidad/Lambda Pi Chi Sorority Inc., HPU’s first Latina-based, but not Latina-exclusive Greek organization. The sorority accepts students of every ethnicity and raises money to create scholarships for first-generation college students from the city of High Point.

Her work with Lambda Pi Chi has gotten her more involved on campus. She helps Terry Chavis, HPU’s director of multicultural affairs, with programming and events that increase awareness about diversity, equity and inclusion through her membership on the VOICE Advisory Board.

“BCA showed me the beauty of being Black,” she says. “There was so much I didn’t know, and BCA helped fill in a missing piece of me.”

Dr. Doug Hall, now HPU’s assistant vice president of diversity and inclusion, met Rainer when she was a freshman. Hall worked as a career advisor then, and Rainer frequently visited HPU’s Office of Career and Professional Development.

She was attuned to the need for career development for someone her age. In high school, she had interned with the local NAACP branch and with the office of U.S. Rep. Nydia Velazquez. This summer, a nonprofit known as Project Basta helped her get internship as a municipal credit analyst with Build America Mutual, a bond insurer in New York City.

Rainer is a member of Alpha Kappa Psi, HPU’s business fraternity. This semester, she created a Fun Spa Night during exam week and a women’s leadership panel to help her fraternity members understand the different perspectives of professionalism in the corporate world.

This semester, she also started as a Student Justice on the Student Conduct Board. She wanted to become a Student Justice because she saw the position as a way to help students learn from their choices that they make.

For the past two years, she also has helped undergraduates living on one particular hall do the same thing. She’s a resident assistant, and she helps at least 40 undergraduates navigate college life. She remembers the conversations, especially one right after she got off weekend duty.

“We just talked about life, like ‘What’s it like to be in your world?’” she says. “It was uncomfortable, but it was needed, and you don’t recognize the need for those kinds of conversations until they happen. The more relationships you have the better. Being open with other people teaches you a lot.”

That’s what “Rise” is all about.

“I want the book to be for first-generation college students with unique cultural backgrounds who are doing things for the first time,” Rainer says. “I want to let them know that ‘Hey, it’s OK to be uncomfortable. Appreciate who you are.’”

With the help of HPU, Rainer has.