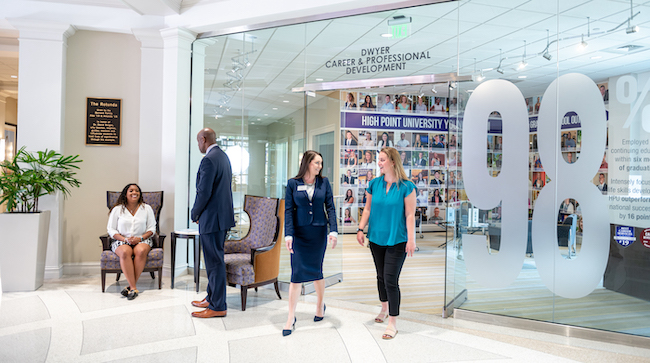 This story is featured in the Fall 2022 edition of the HPU Magazine.

HPU’s Office of Career and Professional Development is the launch pad for students to begin stellar careers.

Have you ever envisioned your first job interview?

Some people picture walking into the interview for their dream job, but the worry takes over. What if their hands are shaking, their stomach has butterflies and their mind blanks?

But that doesn’t happen, at least not for HPU graduates who studied at The Premier Life Skills University.

They researched. They practiced in learning labs on a campus that mimics real-world corporations.

And when they walked into that interview, they confidently shook hands with leaders, impressed others with their knowledge and work ethic, and exuded a professional presence.

They were ready. After all, they began their professional development journey early.

“Students engage with us as early as possible and have a higher level of confidence,” says Dr. Doug Hall, vice president of Career and Professional Development. “The process of forging their career path is developmental in nature and requires ongoing engagement. Doing so over time allows students to see themselves blossom and secure opportunities that position them for success.”

This precedent is what sets HPU students apart from other college graduates. They leave campus ready to take on the world as it’s going to be. 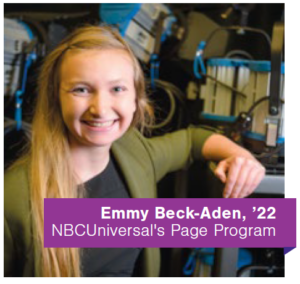 Beck-Aden had her own real-world experiences at HPU that resulted in a full-time job offer with NBCUniversal before graduation.

She remembers how it felt to direct her first show inside HPU’s TV studio in the Nido R. Qubein School of Communication. Overseeing a cast, crew, researchers and social media specialists was a moment she’ll never forget.

She landed an internship with NBC Sports headquarters, working as a video streaming coordinator for the Winter Olympics. She helped make many of the livestreams possible throughout the Olympics.

“HPU provided me with unmatched opportunities, resources and mentors,” she says. “HPU instills confidence in students to pursue their passions and purpose through inspiration and collaboration.”

Her wealth of experience gave her a fully formed resume that caught recruiters’ attention. HPU’s Office of Career and Professional Development gave her the resources to nail the job search and interview process.

As a result, Beck-Aden was hired by NBCUniversal’s Page Program. The position is a year-long rotational program designed for groups of young professionals in both New York City and Los Angeles. She works with departments throughout the company, spanning anything from production and business development to public relations and digital.

“I’m very grateful for all the hands on learning experiences I received, particularly in production,” she says. “I have spearheaded and broadcast a variety of news, sports and entertainment shows while getting valuable advice from fellow peers, faculty and staff.”

The recruitment process was rigorous. But Beck-Aden had the experiential learning opportunities, along with the adaptability and passion those opportunities cultivate, to land the highly sought after position at NBCUniversal.

These moments are a foundational element of HPU’s curriculum. 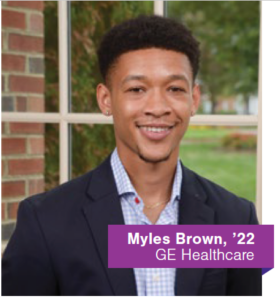 Brown, who majored in strategic communication with minors in business and marketing, joined GE Healthcare in Milwaukee, Wisconsin, in their Commercial Leadership Program.

Brown will be working in three different cities over the span of two years to learn all aspects of the business development process and use his understanding of the company to shape his career beyond the program.

“I learn best when put into real-life experiences, and HPU provided me with those opportunities,” he says. “The career advisors I worked with in the Office of Career and Professional Development helped me. As an underclassman, they showed me how to make myself stand out, build a resume and write a cover letter. I later worked in their office as a peer career advisor where I assisted other students in building resumes and mentored underclassmen.”

By starting his journey early, he quickly reached a level of success that prepared him to pass his expertise on to other students. Now, the life skills he gained at HPU will support him through any career.

“HPU taught me responsibility, interpersonal skills, public speaking, time management and leadership qualities,” says Brown. “I learned to establish what I want in life, to be relentless in the pursuit of success and to not give up. When I fail, I get back up and try again.”

It’s a true full-circle moment for students and their career advisors. 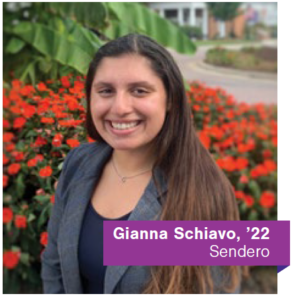 Schiavo graduated with a bachelor’s in international business and a minor in Italian. The Buena, New Jersey, native landed an impressive internship in her undergraduate years and secured a position with Sendero, a management consulting firm, before graduation.

“I utilized the Office of Career and Professional Development starting my freshman year and attended the HPU in the City Program in Washington, D.C.,” says Schiavo. “This allowed me to gain networking experience early on. Thanks to my connections with their office, I interned with Coca-Cola Consolidated before my senior year.”

The Office of Career and Professional Development’s employer relationships offered Schiavo an industry connection and taught her to navigate the professional development process.

By partnering with Lindsay Scott, HPU alumna and talent development manager at Coca-Cola Consolidated, Schiavo shadowed positions in sales, delivery and warehouse departments and met a variety of people who helped her gain insight in different avenues of the business world.

“My experience helped prepare me for the future and showed me a career path I didn’t know existed,” she says. “After reflecting on my internship experience and what my supervisor kept saying to me, I started asking questions of my professors and people in the career office, discovered my enjoyment for consulting and secured a job in that field.”

Schiavo’s hard work proved she could apply skills from previous jobs and knowledge from classes in any professional setting.

“Support from my advisors and mentors gave me confidence in my abilities and helped me figure out how my skills and interests align with different career paths,” she says.

Schiavo had that unshakable self-assurance during her interviews. She was steady, unwavering and knew she had the capabilities to take on her current role.

Students like Schiavo come in unsure of what they can accomplish. They leave confident and prepared to pursue their dreams.

“Mapping out a career trajectory can be overwhelming, so we take the time to learn their interests, provide resources that enhance their career development and provide guidance in experiential education that helps them explore career paths,” says Hall.

It makes all the difference to HPU students. 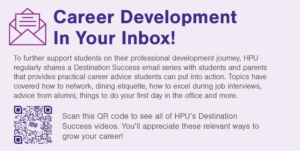