Cohort I In the News

The following article ran in the High Point Enterprise: 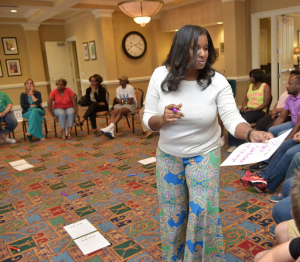 August 2017 — The Leadership Academy at High Point University’s School of Education is opening the pipeline for principals to flow into High Point schools. Meredith Boger, one of the first 15 teachers selected for the principal preparation program, was hired as assistant principal at Johnson Street Global Studies even before the end of the program’s summer term last week. “I just want to do more to help teachers be effective in the classroom and find that joy in teaching again,” Boger said. “I see my role as helping them grow professionally so they can help our students grow. I’m a fixer by nature. I wanted to be one of the ones to make a change.”

The N.C. General Assembly awarded a two-year $1.78 million principal preparation grant to develop leaders who would be able to transform high-need schools. The grant, managed by the N.C. Alliance for School Leadership Development, funded $833,000 for 2016-2017 and $893,000 for 2017-2018 to begin the Leadership Academy this year. The grants cover education costs and participants’ salaries for five months while candidates earn graduate credits. As one of five universities to receive the grant, HPU partnered with Guilford County Schools and six other school districts to prepare 41 principal candidates over a two-year period.

The N.C. General Assembly awarded a two-year $1.78 million principal preparation grant to develop leaders who would be able to transform high-need schools. The grant, managed by the N.C. Alliance for School Leadership Development, funded $833,000 for 2016-2017 and $893,000 for 2017-2018 to begin the Leadership Academy this year. The grants cover education costs and participants’ salaries for five months while candidates earn graduate credits. “Our pipeline of principals is drying up, so that’s what the funding is about,” said Barbara Zwadyk, project manager for leadership studies and an associate professor in HPU school of education. The graduate-level program normally takes two years but was condensed into one year with participants serving a full-time clinical internship for a semester, she said. The 15 teachers in the first cohort that started in January begin internships this month. The second cohort of 15 teachers started in May and will begin internships in January. Both cohorts will graduate in May 2018 with a master’s of education degree in school administration and licensing to be a school administrator. “As they’re coming out of this program, they will be prepared to deal with the challenges of schools that need them the most,” said Amy Holcombe, a GCS staff member and adjunct HPU professor for this program. “It is a grant-funded opportunity that will allow us to prepare educators to be leaders of highly impacted schools. They’re getting hands-on experiences learning from master principals and each other, because of the cohort model. They are learning from experts in the field, across school districts in the Central Carolina Region and our partners with the Center for Creative Leadership.”

Jairo Lopez, another member of the first cohort, began his internship as assistant principal at Ferndale Middle School this summer. Lopez had considered administration after teaching Spanish for more than eight years at the Middle College at GTCC – High Point. Through the leadership academy, Lopez learned about legal aspects and developing school culture. “The program is geared specifically to targeting low-income, high-needs schools so it’s giving us the basics of things you need as an administrator,” Lopez said. “The focus was on helping those schools with the highest needs and where the students might need a little extra push.” 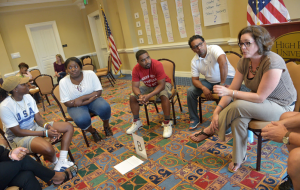 Jennifer Cooper will intern this fall at Johnson Street Global Studies, where she has worked as a curriculum facilitator for three years. For the spring semester, she will intern at Oak View Elementary. As part of the May cohort, she studied three courses during the summer term on organizational management, creating a data culture and a culture within a school. “More than anything it is figuring out how those different pieces fit together to create that culture, because one aspect drives the next,” Cooper said. “This was a very rigorous process just to become a part of the High Point Leadership Academy and I think that the fact that the candidates were identified on the front-end will benefit our community. I’m thrilled that I’m going to be placed at Oak View. I’m a resident of High Point so I believe in connecting the school to the greater community. That’s part of the reasons I want to be an administrator, to impact the community in which I live. Lopez also spoke of school culture extending beyond the campus. “Of course you want to start with teachers, staff, parents and students but then it’s that whole ‘it takes a village to raise a child’ attitude,” Lopez said. “I know that’s one of the things we’re attempting to do at Ferndale, to reach out more into the community and develop those relationships. Zwadyk described the Leadership Academy’s alternative licensure program as intense and its first two cohorts of teachers as “a remarkable group of bright, energetic and dedicated learners who are intent on providing the best for children and the staff which they lead.”