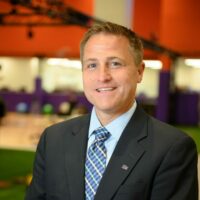 Kevin R. Ford, PhD, FACSM is the Dean of the Congdon School of Health Sciences and Professor in the Department of Physical Therapy at High Point University. Dr. Ford is an accomplished researcher in sports medicine and biomechanics. He has published over 160 peer-reviewed articles, which have been referenced over 20,000 times in leading medical journals such as New England Journal of Medicine, British Medical Journal, and American Journal of Sports Medicine. He is a world-renowned expert in biomechanics and has served as Principal Investigator or Co-Investigator on multiple NIH funded grants in addition to consistent industry support. Dr. Ford was the previous Chair of the Biomechanics Interest group of the American College of Sports Medicine and the recipient of several research awards highlighting his contributions to the scientific literature. He was awarded the Nicolas Andry Award (2012), from the Association of Bone and Joint Surgeons, for a body of work conducted and published over an extended period of time that deals with the musculoskeletal system and has significantly contributed to orthopaedic knowledge and practice. Additionally his research has received the prestigious O’Donoghue Award twice (2005, 2015), from the American Society for Sports Medicine, awarded to the best overall paper which deals with clinical based research or human in-vivo research.