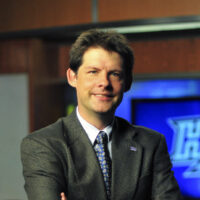 Jim Y. Trammell is an associate professor of communication at the Nido R. Qubein School of Communication at High Point University. He teaches in the Popular Culture & Media Production program, teaching courses in video production and media history.

Dr. Trammell’s research centers around religion and media. His work includes studies about Christian film criticism, the portrayals of religion in mainstream television, the impact of marketing in the evangelical Christian subculture, the coverage of gays and lesbians in the evangelical Christian press, and the creation of numinous experiences in Christian concert films. His work appears in Journalism and Mass Communication Quarterly, the Journal of Media and Religion, the Journal of Communication Inquiry, and the Encyclopedia of Religion in America (CQ Press). He is also a former head and research chair of the Religion and Media Interest Group for the Association for Education in Journalism and Mass Communication.

Dr. Trammell joined the HPU faculty in 2008. He has two children and one wife. In his spare time he camps, plays mini-golf, and reads biographies on Thomas Jefferson. He also plays guitar and bass, but prefers bass because it is a superior instrument.