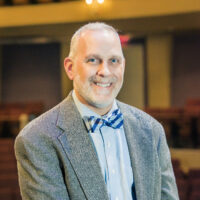 As an undergrad at St. Michael’s College in Colchester, VT, I had the opportunity at the age of twenty to work alongside Equity performers as a summer intern at St. Michael’s Playhouse.  During that summer at the Playhouse, I honed my craft as a scene shop supervisor, as a props master, and as an EMC actor in one of the summer productions.  That lit the fire for my desire to be a part of the theater profession following graduation in 1989.

After graduating, I auditioned and toured with the National Players theater company, based in Washington, DC.  I toured on two occasions, and served as assistant stage manager, props master, and company manager, as well as performing in the productions.  I later served as the General Manager for the group, from 1997 through 2000.  In those years I also worked and performed at the Olney Theater Center for the Arts, in Olney, MD.  I performed in Racing Demon, Amadeus, and Bye Bye Birdie, and worked as an AEA stage manager for the summer Shakespeare series.

Approaching my mid-thirties, I rationalized a return to school for “something practical,” a job that would provide steady pay and benefits.  I graduated in 2006 with a nursing degree and have been working steadily in healthcare since that time.  I’ve always managed to maintain a foothold in theater, performing with Everyman Theatre, Iron Crow Theatre, and AXIS theatre in Baltimore, and Dobama Theater and Ensemble Theater in Cleveland, OH, while maintaining a career as a registered nurse.

I returned to school in 2018 for a Master of Fine Arts program in Technical Production at Kent State University, Kent, OH.  While there I served as technical director for the musical, Hair, in 2019 and Arthur Miller’s, The Crucible in 2020.  In addition, I served as the graduate advisor for the Kent State University Black Box Series and directed a one-act play, Alan Ayckbourn’s Gosforth’s Fete, in 2019.  As a graduate assistant I taught courses including Fabrication Technology, The Art of Theater, and Fundamentals of Production.  I am a proud member of Alpha Psi Omega.