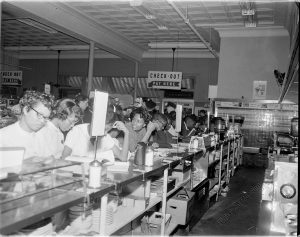 The era of the civil rights movement, circa the 1950s and 1960s, saw immense social and political change in regards to the experiences of African Americans. In a time where the creed of “separate but equal” and segregation were the law of the land in the American south, it was almost impossible for black Americans to break the racial barriers which constrained them. This same policy governed churches and church-related colleges in addition to other aspects of daily life and education. High Point College was little exception to the rule. According to William Locke, in his history of High Point College, entitled “No Easy Task,” the college had been founded to “serve the constituency” of the Methodist Protestant Church, and in North Carolina, this constituency was white. While the college’s first charter did not set up racial barriers, the barriers were implicit and the mores of the time remained unquestioned. Yet, strides were taken to increase the inclusivity of the school as well as to recognize the accomplishments of black students.

Here, we will take a look at two such students who overcame limitations imposed upon them by an unjust society and made notable contributions to the former High Point College, leaving behind a lasting legacy.

Ammie Jenkins was born in 1941. The great-granddaughter of a former slave, Jenkins is a community leader and social entrepreneur who believes in the importance of the preservation and protection of land for future generations. According to the NC Heritage site, her passion for the land is personal as her family lost its farm in 1954 after the death of her father. Homeless at the age of 14, she went to work and helped raise six brothers and sisters.

Jenkins is also well-known for being High Point University’s first African American student. She came to the school in 1962 in the midst of civil rights protests as an evening student and was the first to be integrated into the college. While enrolled, she was a member of the university “Tower Players” where she once appeared in Tennessee William’s “A Streetcar Named Desire” in the role of “Negro Woman.” This performance took place on November 14th and 15th in 1963. After college and before returning home, she had a successful career as a computer programmer and businesswoman.

In addition to her connection to High Point College, she is also one of the state’s most dynamic advocates for black farming and landownership. Jenkins is the founder and executive director of the Sandhills Family Heritage Association. As such, Jenkins leads a grass-roots effort which celebrates and strengthens the heritage of black farming in Cumberland, Lee, Harnett, Richmond, Moore and Hoke counties. Many African Americans, like Jenkins, lost their land through racial intimidation and suffered as a result, so Jenkins founded this organization to “address the issues of loss of land, livelihoods and cultural heritage.” Jenkins is particularly proud of the SFHA’s service learning projects for students which allows them to develop business and life management skills. She is the author of two books entitled “Preserving Our Family Heritage” and “Healing from the Land” in which she explores her findings concerning the independence and self-sufficiency of land ownership and its associated communities.

Jenkins is still alive and well today where she takes an interest in the younger generation hoping to instill values of entrepreneurship and hard work. These values are certainly familiar to High Point University and it is befitting that our first African American student should espouse and endorse them so wholeheartedly.

In 1968, High Point College reached another milestone on the road to progress for minority students. It was this year that Shelby Jean Wilkes was conferred a bachelor’s degree. A High Point native, Wilkes had graduated from William Penn High School. While enrolled at High Point, she was an active student on campus. Like Ammie Jenkins, Wilkes was also a member of  the Tower Players – a campus thespian club. She was also elected an officer during her time on campus. Wilkes was also an active member of the International Club and served on a financial committee which focused specifically on day students. Aside from her campus involvement, it is clear that Shelby possessed impressive academic credentials as well as she served as a Junior Marshal for the graduating class of 1967.

Jenkins and Wilkes paved the way for many other African American students to excel at HPU, as is seen in later editions of the Zenith. By the 1980s, nearly eight percent of day and night students were minorities.