Substance use disorders permeate our society and are among the most prominent leading health crises facing the nation. Today, we are in the midst of an opioid crisis that has strained the health care infrastructure and brought into sharp focus the need for more effective pharmacotherapies to treat substance use disorders. Investigating the neurobiology of addiction, craving and relapse is fundamental step for understanding the cause and consequences of this brain disease. To this end, our lab uses numerous techniques (analytical, biochemical and biological) and models (cell, rodent, monkey and human) to develop a more comprehensive knowledge of the disease process. Based on our studies, we are exploring the utility of compounds from botanical (kratom and ibogaine) and semi-synthetic sources to treat specific aspects of the addiction process.

Schizophrenia and depression are serious mental health disease that affect approximately 1% and 3% of the world’s population, respectively. Currently available medications for treating these disorders are effective in some individuals for certain aspects of the diseases. The clinical complexity of schizophrenia and depression is paralleled by the complexity neurobiological, genetic and epigenetic contributions underlying these diseases. Utilizing human post-mortem brain tissue from world renowned human brain banks, non-human primate and rodent models we use biochemical and molecular approaches to understand the aberrant neurobiology associated with these diseases and the positive and negative implications of chronic antipsychotic and antidepressant medications on brain function.

P50 DA06634 (Childers, PI; Hemby, Project 3 Leader) 04/01/10 – 03/31/14 NIH/NIDA Center for the Neurobiological Investigation of Drug Abuse Biochemical Mechanisms of Effective Treatments. Oversight of project and integration with other projects and cores in the Center. Direct investigations into alterations and restoration of synaptic plasticity in primate and rodent models.

R21 DA027512-01 (Hemby, PI) 9/01/09 – 08/31/12 NIH/NIDA: Proteomic biosignatures of withdrawal from cocaine in rhesus monkeys. Identification of plasma protein biomarkers during various stages of cocaine withdrawal and determine their ability to serve as surrogates for CNS pathology.

News from the School of Pharmacy 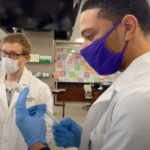