The research being conducted by the two dozen students in HPU’s Summer Undergraduate Research Program in the Science (SuRPS) covers a wide range of physical scales. Rising senior Ryan Hegedus’ work deals with the largest of scales at SuRPS: extreme binary star systems moving on the order of 200,000 mph at a distance of 100s of light years from Earth. For the past 7 weeks, he has been working with Dr. Barlow and Dr. Veronika Schaffenroth (Univ. of Innsbruck, Austria) on a project called EREBOS (Eclipsing Reflection Effect Binaries from the OGLE Survey), which studies the effects substellar objects (planets and brown dwarfs) might have on stellar evolution. By determining the properties of extreme binary star systems called HW Vir binaries, one can determine whether substellar objects survive engulfment by a red giant star and alter the fate of their companions without evaporating/merging. Ryan’s primary contributions to the EREBOS project include (i) obtaining new photometry and spectroscopy of HW Vir systems with the 4-meter SOAR telescope in Chile, (ii) writing code to determine the orbital velocities of stars in these systems, and (iii) modeling the light curves and velocities to determine the masses of the stars in each binary. Although the EREBOS project will take years to complete, enough data have been collected and analyzed to publish the first EREBOS journal article in the coming months! 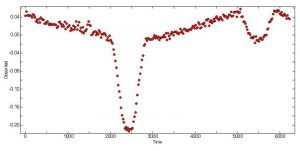