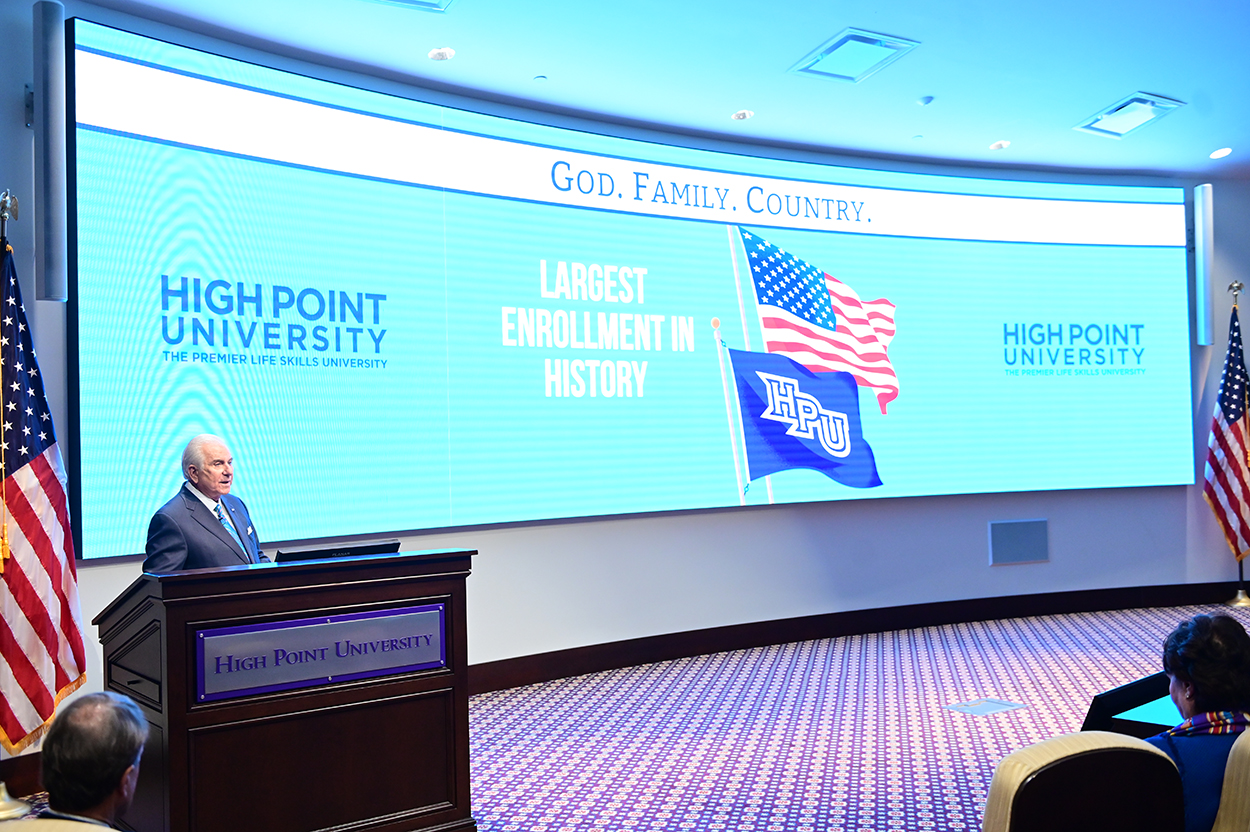 The announcement is helping fuel a $400 million expansion with four new academic schools, including a law school.

The three separate families, who all reside outside of North Carolina and who own and operate businesses in the areas of health care, insurance and publishing, recognized HPU’s legacy of providing an extraordinary education with values that focus on God, family and country. Their philanthropic investments will specifically support new graduate schools and construction.

The announcement continues HPU’s transformation, which began when Qubein became president in 2005. Since that time, he has raised $600 million without a formal campaign, including $100 million in the last month alone.

“Thanks to Dr. Qubein’s leadership, support from families such as these, operational surpluses and university revenues, no new debt will be acquired to complete the projects,” said Robert Brown, chairman of HPU’s Board of Trustees.

“At HPU, we’re on a rocket ship to the moon,” said Dr. Qubein during today’s standing-room only announcement. “Our growth is truly a miracle with God’s hand on it. Students and families across the country appreciate that HPU delivers an education founded on values and framed with life skills. Our future has never been brighter, and our faculty and staff continue marching forward with faithful courage.”

Further details for each major announcement are provided below.

In addition to the School of Dental Medicine and Oral Health HPU recently announced, the university will continue advancing its academic growth by launching these academic schools, all of which will go through appropriate accreditation processes to provide graduate-level degrees.

HPU will establish a School of Law.

A founding dean with experience leading a successful law school has been hired and will be announced in May, along with a timeline for the new facility and inaugural class.

HPU will establish a School of Optometry.

A national search for a founding dean is underway. It will be North Carolina’s only School of Optometry. A timeline for a new facility and inaugural class will be announced in the fall.

HPU will establish a School of Nursing.

HPU currently has a Department of Nursing, which will welcome its inaugural class this fall. The university will establish a School of Nursing with undergraduate and graduate degrees to prepare leaders who are ready to meet the growing demands of health care.

HPU will establish a School of Entrepreneurship.

A timeline is in development.

Construction will soon begin on HPU’s School of Dental Medicine and Oral Health.

As part of the $100 million contributed to HPU in the last 30 days, a national leader in the field of dentistry has recognized HPU with a multimillion-dollar figure to support the university’s future dental school facility. The university announced in May 2021 it will establish the state’s only private dental school. Dr. Scott De Rossi, who recently served as dean and professor at UNC Chapel Hill’s dental school, is the founding dean for HPU’s dental school, which will enroll its first class in fall 2023.

HPU will build these new facilities in a hub on the university’s Innovation Corridor near the intersection of Qubein Avenue and Centennial Street. Congdon Hall, which houses the Congdon School of Health Sciences and Fred Wilson School of Pharmacy, is also located here. By creating a centralized hub for health care education, HPU students will benefit from interdisciplinary learning by connecting and collaborating with each other.

The $80 million Panther Commons facility will be built in the heart of campus at the corner of Panther Drive and Farris Avenue near the new Nido and Mariana Qubein Arena and Conference Center. Construction will begin this month and is expected to finish by summer of 2023.

The 200,000-square-foot building will stand five stories tall and house 400 students. This new residence hall will also include several retail shops on the first floor, including a hibachi restaurant, nail salon, mail service, fitness studios, study rooms and more, serving as a hub of activity and engagement.

HPU is adding 32 new houses near McCain Place and Guilford Avenue, totaling $10 million in construction to support 140 students. This area is close in proximity to the future Panther Commons facility, establishing a new residential hub in the northwest quadrant of campus.

Construction on most of the houses in this area began in December 2021 and is expected to finish during the spring of this year. The additional housing will support growing enrollment as 95% of students choose to live on campus.

As part of this investment, the university will add an innovative neighborhood called Campus Cottages. It will feature about a dozen homes, each of which will house one student.

HPU is building its first parking garage on campus behind Congdon Hall and the Wanek School of Natural Sciences. The $25 million project will provide 1,200 parking spaces, begin construction by early spring of this year and be completed by December 2022.

HPU’s continued growth is evident in soaring enrollment. The largest number of new students – 1,550 – joined the HPU family this year, while the university also achieved its largest total enrollment of almost 6,000 students. These milestones follow numerous others achieved since Dr. Nido Qubein became president in 2005, including increasing academic schools from 3 to 14, the establishment of numerous new undergraduate and graduate programs, growing the campus from 90 to 520 acres, quadrupling enrollment, multiplying net assets tenfold and tripling the size of the endowment.