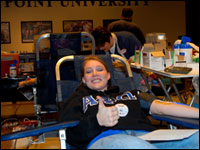 HIGH POINT, N.C., Jan. 29, 2009 – The High Point University Volunteer Center, led by David Perez, a junior, hosted a blood drive on Jan. 27 in the Slane Student Center. The event was sponsored by Alpha Phi Omega, a service fraternity at HPU.

The blood drive brought in a total 61 pints of blood throughout the day.

The Volunteer Center previously held a blood drive in November, where they collected 92 units from the HPU family – including 37 first-time donors. All told, the group has donated 269 units to the American Red Cross, which puts them on track to beat last year’s record, which was an all-time high of 242 units over four blood drive events.

HPU Welcomes New Hires in April and May