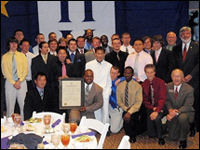 Seven of the fraternity brothers had the opportunity to attend the event – which not only gave them a chance to participate in a weekend full of exciting seminars to help sharpen their leadership skills, but also gave them the chance to meet 500 other members from Pi Kappa Phi from around the country.

Andrew Realon, member of Pi Kappa Phi, says one of the highlights of the conference was hearing from a brother who personally knew two of the original founders of the fraternity, which was established in 1904.

“It was such a tremendous opportunity to meet with brothers from other chapters and see how much we had in common as we learned about how to be leaders together,” Realon says.

Pi Kappa Phi, which officially became a chartered chapter at HPU in April 2008, hosted several philanthropy activities during the fall 2008 semester for the fraternity’s national philanthropy, PUSH America. Fundraisers included “No Boundaries Week,” a car smash and a bike-a-thon.

The group hopes to continue its philanthropic efforts during the spring semester using the new leadership skills that were learned during the conference. 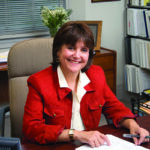