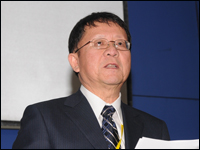 HIGH POINT, N.C., Jan. 21, 2009 – Dr. Peng Deng, professor of history at High Point University, recently presented a paper at the International Symposium on the Shangshanxiaxiang Movement, sponsored by Fudan University and the Shanghai Academy of Social Sciences. The event was held Dec. 21-22 in Shanghai, China.

“Due to the sensitive nature of the topic and its bold argument, my paper generated much discussion after my presentation,” Deng says. “The symposium was the first one on the Shangshanxiaxiang movement in China, and was well-attended by scholars from all over China and graduate students at Fudan University.”