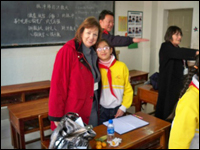 The three-day event began with an opening ceremony, where dignitaries from both China and the United States talked about each country’s education system’s accomplishments, as well as their plan to improve education. Following the ceremony, participants met in groups to discuss research from each country on reading and literacy.

“This open dialogue between educators from two countries was an extraordinary opportunity to share ideas about teaching,” Allred says.
The second day, Allred’s group visited an elementary school and a middle school.

“This was a very unique opportunity to observe firsthand Chinese teachers teaching their students,” Allred says. “We also had opportunities to talk with the teachers and with the students.” The third day, the group visited a tiny village school in the Guizhou Province of China.

“Everyone who lived within walking distance came to greet us and perform traditional folk dances,” Allred says. “We, in turn, performed the Hokey Pokey – a song and dance that was known by all of us and easy for us to teach to them.”

Before the group left, they provided each of the schools with gifts from America ? books, school supplies and money.

“It is difficult to express the emotions that I experienced on this trip,” Allred says. “As a lifelong educator, I went expecting to visit schools and learn a little about their educational system. But the trip was so much more. … Although the United States and China see and do many things differently based on the countries’ political structures, we also have many things in common. I believe we can learn from them just as they wanted to learn from us – a truly global moment. And I am honored to have served as an ambassador for my country.”

At High Point University, every student receives an extraordinary education in a fun environment with caring people. HPU, located in the Piedmont Triad region of North Carolina, is a liberal arts institution with more than 3,400 undergraduate and graduate students from more than 50 countries and more than 40 states at campuses in High Point and Winston-Salem. It is ranked by US News and World Report No. 5 among comprehensive universities in the South and No. 1 in its category among up-and-coming schools. Forbes.com ranks HPU in the top 6 percent among “America’s Best Colleges.” The university offers 66 undergraduate majors, 40 undergraduate minors and seven graduate-degree majors. It is accredited by the Commission of Colleges of the Southern Association of Colleges and Schools, and is a member of the NCAA, Division I and the Big South Conference. Visit High Point University on the Web at http://www.highpoint.edu/.