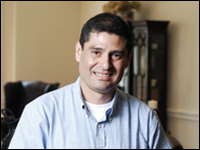 Honores presented “Caciques as Legal Benefactors: Cacial Legal Offensive in the Andes, 1552-1572.” The paper explores how the Andean caciques (local lords) used the legal system and how these lords were successful in their legal campaigns between 1552 and 1572 in the Peruvian Andes.

“This paper is part of my research on customary law and the use of European law in the colonial Andes,” explains Honores, who is a member of the Conference of Latin American History. “This summer I will spend some weeks researching in Bolivian and Peruvian archives to collect more information on this issue.”

While at the conference, which is one of the oldest academic institutions in the country, Honores also participated in a panel, “Colonial Caciques as Native Leaders and Go-Betweens in Mesoamerica and the Andes.” The panel, which consisted of five participants and one discussant, was part of the “Conference of Latin American History,” which is a chapter devoted to Latin American History and affiliated with the “American Historical Association.”