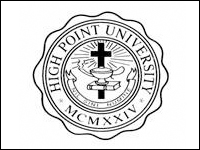 HIGH POINT, N.C., Feb. 17, 2009 – Chris Crecelius, a 2002 graduate of High Point University, is busy making a name for his media company and magazine, “Line Up” – so busy, in fact, that he hopes to line up a bi-monthly publication schedule by next year.

Publishing out of Wilmington, Crecelius – who majored in business administration and marketing with a minor concentration in fine arts at HPU – says the magazine first hit the stands on July 4, 2005, and went into quarterly publication in 2006. He hopes the magazine will move into bi-monthly publication by next year, and then make the move to monthly by 2011.

Crecelius describes “Line Up” as a lifestyle publication that covers surfing, skateboarding, snowboarding, music and art. Currently, it has a circulation of 50,000 per issue, but with the expansion possibilities, the sky is the limit. The publication, which is sold with a CD/DVD, is sold in thousands of U.S. retail outlets – including Barnes & Noble, Hollister’s and Books-A-Million – as well as in 16 additional international markets, including Taiwan, Australia, China, Brazil, Greece and Mexico.

“Our Web site gets an average of 80,000 hits per month,” Crecelius says. “The demand is overwhelming and we are now living in one of the advantageous times to begin full-scale growth of a company of this kind. The recent economic downturn has left a level playing field for us to become a leader in this overall market, especially because we are a first mover company with a fresh approach.”

Crecelius says he owes a lot of his success to his learning experiences at HPU, including Senior Seminar, where he learned real-world practice with starting a business, comparing competition, marketing experience and more.

“When I knew Chris as a student, he had creative talent teamed with an entrepreneurial spirit,” says Dr. James Wehrley, dean of the Earl N. Phillips School of Business who also served as adviser to Crecelius during his years at HPU. “It did not surprise me that he embarked on a business venture where he had to use his imagination and creativity. The magazine is edgy, and I can see why it is doing well.”

To view the publication, visit http://www.lineupthemag.com/.