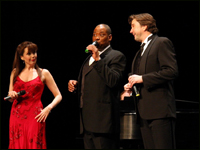 Some of the highlights included Bingo at the Slane Student Center and a movie in the Hayworth Fine Arts Center on Friday. Saturday included a 5K run, campus tours, HPU women’s and men’s basketball games, and a tailgating party.

Two other exciting events on Saturday included the Broadway Revue with Kimilee Bryant and Friends, a fast-paced show that featured stars and songs from many shows, such as “Phantom of the Opera,” “Dreamgirls,” “Oklahoma” and “The Sound of Music”; and Clebe McClary, American hero who fought in the Vietnam War, who shared his story of courage, faith and determination.

“The entire High Point University community truly relishes this annual event because it gives us all such a great opportunity to interact with not only current students, but their parents as well,” says Chris Dudley, vice president for administration and community relations. “The event is not only beneficial to HPU, though. The Family Winter Weekend brings in quite a few visitors, which makes a significant economic impact on the city of High Point.”