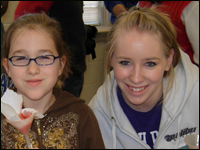 Children participating in the science fair presented their projects and were interviewed by judges as well. This year, the event welcomed students from around the Triad, including children from Greensboro Montessori School, Greenhills School, Our Lady of Mercy and Community Baptist School, as well as children from Classical Conversations home-school groups and independent home-school families.

While waiting for their interviews, children and parents enjoyed hands-on experiments. In chemistry, they had a contest to see how many drops of water could be stacked on top of a penny. They also extracted iron from cereal, separated components of ink and food coloring from each other using paper chromotography, made polymer worms, extracted DNA from strawberries and produced a hissing carbon snake (from the dehydration of sucrose). In physics, they made an electric generator, made homemade speakers out of a cup, wire and magnet, made spirograph patterns with a laser and rotating mirrors, and got a shock out of a Van de Graff generator. Approximately 20 HPU chemistry and physics students assisted with the experiments.

Dr. Aaron Titus, assistant professor and chair of the HPU Physics Department, says the event was highlighted by the amazing curiosity of such talented young people who exhibit the excitement of scientific discovery. “During the physics demonstration show, Dr. McNairy looked at the children and said, ‘You are scientists!'”

“I wouldn’t be surprised if many of these children go on to study science in the future,” says Titus, who organized the hands-on exhibits and demonstration show along with Goldston. “Not only do we hope to turn kids on to science, but we also hope to recruit them to HPU.”