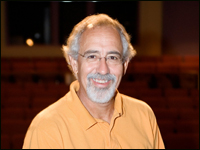 HIGH POINT, N.C., Feb. 4, 2009 – The High Point University Theatre will present the comedy “Early One Evening at the Rainbow Bar and Grille” in the Empty Space Theatre of the Old Student Center. The show will run Feb. 26 through March 1 and is open to the public.

The production, directed by Ed Simpson, professor of theatre and chair of the Performing Arts Department at HPU, takes the audience to a tiny, forgotten town in western Pennsylvania just off the exit ramp where six ordinary folks face themselves, each other and the terrifying certainty of an early and unjust end. The six folks panic at the thought of their impending doom, and their inhibitions vanish. The scenario results in a high-energy production with quirky characters at the end of their ropes.

“In addition to being an offbeat comedy, it’s also a modern morality play, addressing – in a comic way – some important ethical, moral and religious issues,”Simpson says.” I’ve described it to students and colleagues as a sort of theatrical ‘Twilight Zone.'”

Also, award-winning playwright Bruce Graham, who penned the play, will attend opening night and will participate in an after-performance “talk back session” with the audience.