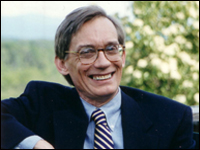 The topic of the Keller Seminar will be “Job and the Problem of Suffering,” which will include an examination of the book of Job and its poetic treatment of the human condition. The course will consider other biblical and ancient Near Eastern texts that deal with the issue of evil in the world from a religious perspective, and later readings and retellings of Job by Frost, MacLeish, Wiesel, Frackenheim and others.

Coogan, director of publications for the Harvard Semitic Museum and professor of religious studies at Stonehill College, has also taught at Harvard University, Boston College, Wellesley College, Fordham University and the University of Waterloo in Ontario. He is considered one of the leading scholars in the United States, and is author of “The Old Testament: A Very Short Introduction” and “The Old Testament: A Historical and Literary Introduction to the Hebrew Scriptures.” He also served as editor of the third edition of “The New Oxford Annotated Bible.”

The Finch Lectures at HPU began in 1960, with Dean Liston Pope of Yale Divinity School as lecturer, in an effort to foster dialogue and to deepen understanding regarding issues of importance to communities of faith. Since the inaugural event, a distinguished line of clergy, humanitarians and scholars has visited the HPU campus each year.