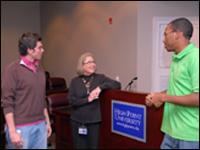 HIGH POINT, N.C., Feb. 12, 2009 – Senior marketing students at High Point University recently received help with their marketing plans thanks to assistance from Karen Adams, president of Fox 8 WGHP, and Cindy D’Ambrosio, regional account manager at WGHP, who both visited the campus on Feb. 9.

In the presentation, Adams – an alumna of HPU – and D’Ambrosio shared information about WGHP advertising and promotion capabilities, which students can use to plan promotion efforts in their senior projects. Students also learned that WGHP is the top FOX affiliate in the nation, and learned the advantages of using broadcast television in promotional campaigns.