In 2011, the university committed funds and resources to putting iPads into the hands of every student at Montlieu Academy of Technology.The iPad Project connected faculty and education majors at HPU with students and teachers at Montlieu, a magnet elementary school located less than a mile from the university. In addition to the tablets, School of Education faculty and members of HPU’s I.T. Department provided training for Montlieu teachers and students to implement the technology in the classroom.

Now, a year later, $30 million in funding has been granted to Guilford County Schools through the Race to the Top-District Program. The grant will give all middle school students in the district their own electronic tablets for learning.

Ged O’Donnell, principal of Montlieu Academy, said his school served as the prototype school for this grant that attracted the attention of state officials and led to the school district receiving the funds. Montlieu, however, couldn’t have succeeded without the commitment from community partners like HPU, he adds.

“The time that HPU’s I.T. Department and faculty took to train our teachers one-on-one to implement this technology effectively in the classroom is most important to us. We are grateful for the unique and close partnership HPU has provided through this process.”

“Thanks to the generosity and leadership of High Point University, the Millis Foundation, Bryan Foundation and Businesses for Excellence in Education, we were able use Montlieu Academy as our prototype school for this initiative. Now we want to extend those opportunities to all middle school students in Guilford County Schools,” said GCS Superintendent Maurice O. “Mo” Green. 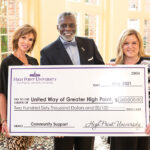 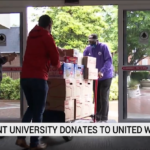