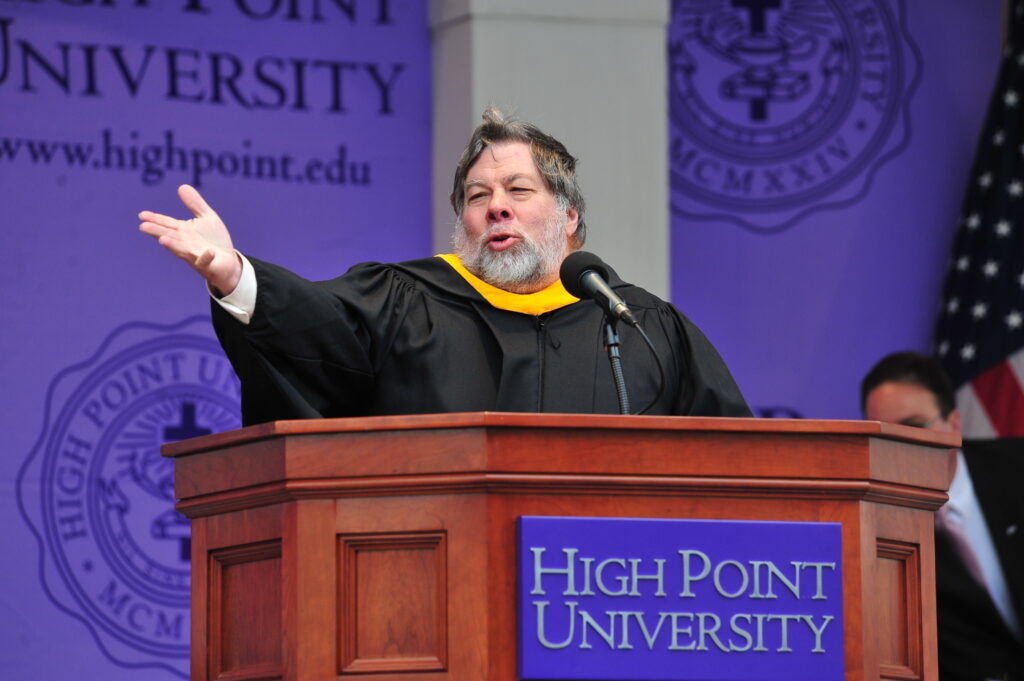 Wozniak congratulates a senior as he walks across the stage. HIGH POINT, N.C., May 4, 2013 – Apple co-founder Steve Wozniak gave the ultimate lesson in innovation and invention to High Point University’s Class of 2013 during his commencement address today at the 89th Graduation Ceremony on the Roberts Hall lawn. A total of 936 degrees were conferred to the largest graduating class in HPU’s history.

“You will be a builder,” the Silicon Valley icon told graduates. “Don’t be afraid to build. You don’t have to get everything out of a book the way it was done in the book, the way someone else did it. You’re now at the point where you’ll think for yourself and you’ll start writing your own book as you create things.”

Wozniak then pointed to the many problems that remain in the world despite all of the advances in technology. It’s up to the Class of 2013 to solve those issues, he said.

“Try to think of new ways to solve the old problems,” Wozniak said. “Very often we look at something we have and say ‘I could make it better.’ That’s innovation. But you know what? Sometimes we say ‘I could do something totally different that makes things a lot easier for people,’ and that’s true invention.”

Wozniak helped shape the computing industry with his design of Apple’s first line of products and influenced the popular Macintosh. In 1976, Wozniak and Steve Jobs founded Apple Computer Inc. with Wozniak’s Apple I personal computer. The following year, he introduced his Apple II personal computer, featuring a central processing unit, a keyboard, color graphics, and a floppy disk drive. The Apple II was integral in launching the personal computer industry. After leaving Apple in 1985, Wozniak has been involved in various business and philanthropic ventures, focusing primarily on computer capabilities in schools and stressing hands-on learning and encouraging creativity for students.

One of the most memorable moments of the ceremony came when senior Collin Smith crossed the stage. Smith is a quadriplegic and has been assisted during his four years at HPU by his constant friend and companion, Ernest Greene. After Smith received his degree, Dr. Nido Qubein, HPU President, presented Greene with an honorary bachelor of humane letters. In the past four years, Greene has volunteered his time to care for, drive and take notes for Smith in every university course. He’s also allowed Smith to live out his dream of working with a NCAA Div. I basketball team. This past year, Smith worked with the HPU men’s basketball team by assisting coaches during practices and keeping statistics during games.

“Ernest embodies the ideals of service that we hold here at High Point University,” said Qubein. 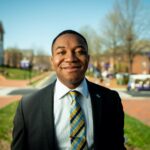