A recent High Point University graduate made headlines his first year of teaching by encouraging his students to make a difference in their community, just like he was encouraged to do at HPU.

In the 2012-13 school year, Chris Terzigni and his fourth grade students at Archer Elementary in Greensboro started a project to finish the Boston Marathon for all the runners who weren’t able to finish the race before the tragic explosions occurred.

Terzigni is a graduate of HPU’s fifth-year education master’s program. He graduated from HPU with his undergraduate degree in 2012, immediately began teaching and completed his master’s in elementary education at HPU in May 2013.

“It all started because of the students,” says Terzigni. “Every Monday we would read the newspaper and the kids would choose a story to discuss. They wanted to talk about the marathon and had a lot of questions.”

Terzigni says the story got the students interested and involved. When they found out that more than 4,400 runners, who had trained for months for this race, had to stop just 1.4 miles from the finish line, they couldn’t believe it.

“Then one student said, ‘Why don’t we finish it for them?’”

Despite the busy school year and End of Grade exams approaching, Terzigni used the students’ interest as an opportunity for learning. The students used math to figure out how many miles they would have to walk or run to finish the race for the runners who weren’t able to cross the finish line.

His students agreed to invite other classes and schools to help out. Terzigni then reached out to other local teachers who he met while studying at HPU. “I made such amazing connections with people while I was at HPU; I knew exactly who to reach out to in order to make this happen.”

Terzigni knew that service learning is more than just doing something; students also had to learn the meaning behind it. To promote the project, his fourth grade students created their own website; marketed the project through emails and power point presentations; researched the Boston Marathon and marathons in general; and compiled data to make sure they reached their goal by using spread sheets and graphs.

“It was amazing to see how quickly they absorbed the information,” says Terzigni. “They just learn skills and concepts faster when they are engaged in a project that they are interested in.”

By the end of the year, the students completed more than enough miles to finish the marathon for all of the runners. To celebrate, a Greensboro man who had to stop running at the marathon came to class and thanked the students for their support.

The school district also honored the class by presenting a special award for service; and the students were featured on five different news stations.

“They were rock stars,” says Terzigni. “They couldn’t contain their excitement, but they were also practicing their speaking and listening skills.”

To top it all off, Archer Elementary created a new position for Terzigni, a technology teacher. Next year he will teach grades K-5 computer and technology skills every week. He’s also been named the new Service Learning Coordinator for the school.

“I’ll work with the teachers to help create lessons like this one,” explains Terzigni. “We’ll find projects that get the kids excited, that will help them learn and that will allow them to make a difference in their community.”

All lessons he learned at High Point University. 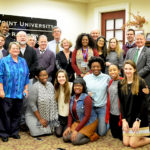 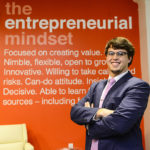 HPU and Alumnus Partner to Help Haiti After Hurricane Matthew 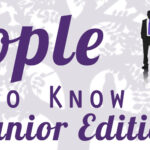 5 People You Need to Know on Campus: Junior Edition 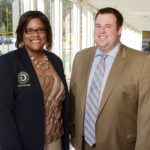