Advocating for Others: How Kingsley Floyd Brings Perspective to the World

Advocating for Others: How Kingsley Floyd Brings Perspective to the World 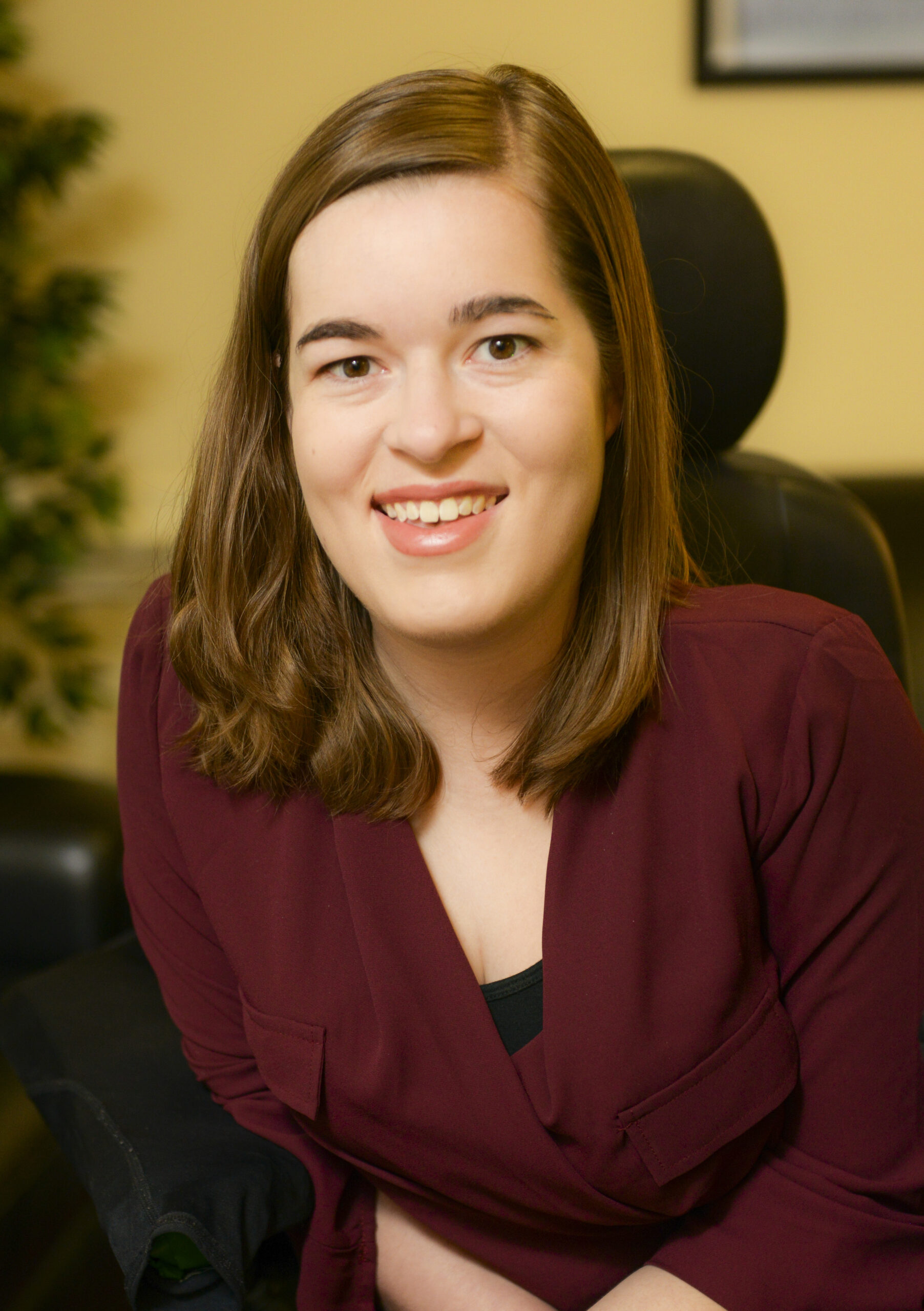 Kingsley Floyd was in the middle of her arm curl reps when it happened one night.

In a crowded gym, a stranger came up to her and asked about her workout routine.

She answered, because that’s part of who Floyd is – a natural conversationalist always open to meeting someone new. They chatted casually for a while, and he asked so many questions that he nearly convinced Floyd he was flirting with her.

But then he said it.

And then she realized it. This wasn’t about flirting or small talk. Instead, something she had written about in class and experienced too many times before was happening.

“I know people think they’re giving me a big compliment,” Floyd says, “but they’re unaware and don’t understand my perspective.”

So she shares it with them, even if it makes others feel uncomfortable. Differences do that, Floyd’s found, but understanding those differences can also bring people together.

“I’ve learned that it’s important to explain to people that I shouldn’t be objectified for inspiration,” she says. “I want people to realize that our society seems to define people by what they can’t do instead of what they can do, and that’s backwards.”

There is a natural boldness in Floyd she’s learned to harness through her growth as a High Point University student. It helps her share her message wherever she goes.

And that message is something she plans to build a career around after she graduates on May 7.

Floyd’s best friends do the opposite of what the guy at the gym did that night.

Like Sam Dempsey, an HPU graduate and assistant coach for the university’s rowing team. Dempsey, like most who know her, calls her “Kings,” and he pushes her to work out and eat right, and he gives her a hard time when she doesn’t make it to the gym.

Those are the types of friendships she’s nurtured during her time at HPU. Four years ago, Floyd came to High Point University like many of her classmates – a long way from home and on her own for the first time.

It was a big, scary move all the way from Maine to High Point, but it didn’t stop her from embracing total independence. She dove into campus clubs, leadership roles and studies that challenged her, like storytelling, literature, French and public policy.

She went on to major in English literature, tackle the toughest Shakespeare courses, win first place for fiction writing in the university’s Phoenix Literary Festival, join the library staff as a student employee, conduct and present research, and earn the utmost respect of her professors.

Like Dr. Jenn Brandt, the director of the Women’s and Genders Studies program, who’s become one of Floyd’s closest mentors.

“Kingsley’s interest is not only in the text and what we do in class, but in the way that connects with the world,” says Brandt. “She’s used plenty of moments in class and projects to get other students thinking critically about what is healthy or normal. That’s what we want students to do – take knowledge and apply it more broadly.”

In short, she thrived and grew as a person, a scholar and a professional.

“When I came here, my confidence shot up. So did my ability to make friends on the spot,” Floyd says.

Abundance Out of Adversity

None of that is necessarily surprising since Floyd is, as Brandt says, “one of the most intellectually engaging students” she’s ever taught. And Floyd is always the first to note that accomplishing things within ones’ reach should be expected.

Her mission, though, is to remind others that she often finds herself living in a world that credits her for things she’s perfectly capable of accomplishing. Like lifting weights at the gym.

Floyd knows why it happens. It’s because she has muscular dystrophy. It’s because watching a person who has an obvious disability lift weights can be jolting to some.

So she uses moments like that night to explain to people that what they think is a compliment actually makes her feel like she’s being put into a box.

“Don’t objectify someone else for your pleasure when they can and should be expected to go to the gym,” she says. “Or, just let me define what I can do. Nine times out of ten, if I say I can do it, I can.”

When she was new to campus, muscular dystrophy seemed like a bigger part of her story, in part because she brought an apple-red scooter with her to navigate the sprawling campus. People noticed it. In fact, it was one of the first things she talked about back then.

But that was four years ago. As she became part of the HPU family, she learned that the scooter didn’t define her. Neither did muscular dystrophy. Neither did what she couldn’t do.

Her abilities, gifts and intellect took center stage on campus, and she discovered that only she defined her story and her narrative.

“Now, my scooter has just blended into my personality.”

Take her favorite Halloween memory, for example, when she and best friend Lilly Chalfant dressed up like Batman and Robin and slapped a felt Batman logo on the basket of Floyd’s scooter. They filled it with candy and circled campus passing it out to anyone and everyone.

The Batman logo is still stuck to the front of her basket today.

“Kings always has such a unique way of expressing herself, and I think her quirk and personality has taught me to embrace who I am and love it unapologetically,” Chalfant says. “I have never met someone who has taught me more about getting to know the core of a person rather than just the surface.”

Today, the things that make up Kingsley are vast and broad.

Like her tenacity. Her peers and professors have seen it in class and around campus.

“She talks about her independence to other people, and people give her looks,” Brandt says. “She surprises them. But I love that about her. She’s someone who came to High Point to embrace everything the university has to offer. She shows what a student can achieve when they do that.”

Or the research she’s conducted on accessibility and social norms. An internship that she completed last summer with Alpha One, an organization in Portland, Maine with a mission to “redefine disability,” sent Floyd into a portion of the city to canvas local businesses on a topic that, yet again, made some feel uncomfortable.

“Our survey focused on whether or not businesses in the area provided accessibility points required by the American with Disabilities Act,” Floyd says. “Ninety-four percent of the businesses we went to did not have the resources required by the federal government. That frustrated me as a person, because it meant that 6 percent of businesses were fully accessible, and the rest varied from mildly to none.”

It was one of the defining moments that showed Floyd that people defined as “disabled” need to champion themselves and others.

Thriving on a Caring Campus

Floyd’s about to make another big, scary move in her life. But she’s ready for it. She did it four years ago, and she’ll knows she’ll keep doing it again and again.

She’s begun the journey of pinning down the career that’s right for her from a list of promising leads. It might be public policy work on Capitol Hill. It might be with an organization like Alpha One. Or, she might work in a university setting to make sure that anyone with a disability has someone to remind them that they, too, have abilities and options and opportunities.

She leaves good friends behind who push her to be better and stronger. But she pushes herself, too, to tackle the world head on.

Like when she made the trek from Maine to HPU. She could have backed out. But she didn’t.

Or when she learned to embrace her abilities, and began teaching others to do the same.

Or when she asked restaurant and store owners how individuals in wheelchairs were supposed to access their establishments.

Or when she spoke up in class to offer her own perspective, which was often something no one had ever heard before.

When she receives her degree on stage, she knows it’s a culmination of so many things: all her knowledge, wisdom, values and defining moments wrapped together.