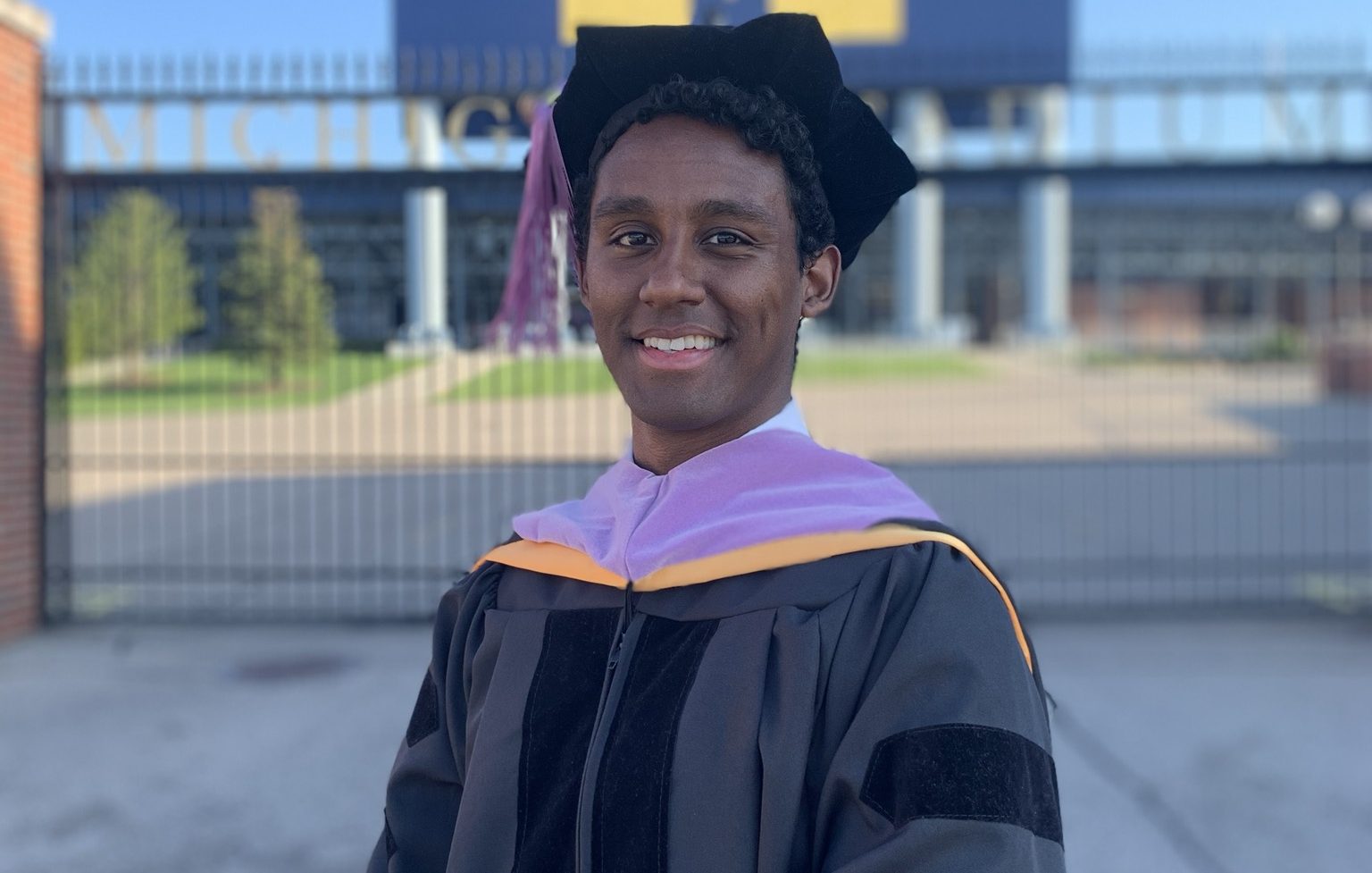 From the lacrosse field to the field of dentistry, Dr. Richard Byrd, ’16, discovered his foundation for lifelong success at HPU. Pictured here, Byrd stands at his dental school graduation.

What does it feel like to graduate from one of the top dental schools in the world?

He graduated from The University of Michigan’s top-ranked School of Dentistry in May 2020. His next stop? Howard University for a specialization in orthodontics.

Each step is part of Byrd’s journey to becoming an orthodontist.

But the university that started it all? That’s High Point University.

Born and raised in Richmond, Virginia, Byrd grew up sure of two things: his love of lacrosse and his plans to pursue a role in medicine.

When it was time to select a university, he was hopeful to find one that accommodated both.

Torpey had seen Byrd play during his senior year of high school and invited him to a camp in Maryland.

It was on his car ride home from that camp when Byrd got an email from Torpey extending an offer to join the HPU team.

Lacrosse was a passion of Byrd’s, but not his end goal. He was excited at the prospect of playing but needed to make sure his undergraduate years would set him on a path to the medical field.

A little research and a visit to HPU confirmed his hopes. HPU was a place where he could grow as an athlete, as a student and as a person who would stand out when it came time to compete for a spot in graduate schools.

His next step was meeting the mentors and discovering the support system that would get him there.

It wasn’t long after arriving to HPU that his decision to pursue dental school became clear.

It was even less time before Byrd found his campus mentors.

Torpey quickly became his mentor both on and off the field.

As a midfielder for HPU men’s lacrosse, Byrd learned the values of hard work, teamwork and resilience from Torpey.

“He instilled in me and solidified a sense of hard work and the grit it takes to be successful in any field,” says Byrd. “Playing lacrosse at HPU gave me a will to work harder than others to get where I want to be.”

Torpey was a motivator for Byrd. He reminded Byrd and his teammates constantly about the importance of working for something bigger than one’s self.

That passion and love of putting others first inspired Byrd’s career path.

He wanted to perform life-changing work and build relationships with patients. Orthodontics offers that opportunity. Byrd knew that’s where he needed to be.

With a set career goal, Byrd soon found mentors in the classroom to help carve his academic path.

Looking at course offerings, he realized he was interested in psychology. But how would that play into his goals for dental school? Would a major in psychology allow him to stand out in the competitive dental school application process?

Dr. Jana Spain, professor of psychology, had the answers.

Spain worked with Byrd to chart a path. Yes, a major in psychology covered all of the foundations he would need for dental school. And yes, he would be more than prepared.

Byrd also minored in biology. That’s how he fell under the mentorship of Dr. Kelli Sapp, associate professor of biology.

Sapp guided Byrd through his undergraduate years, made sure he stayed on top of his dental school requirements and, when the time came, wrote Byrd a letter of recommendation.

Four years after graduating from HPU, Byrd still smiles when he thinks about his HPU mentors, the conversations in their office hours, the letters written for him and the time spent making sure he always felt confident in his academic path.

And though it’s been four years since he last coached Byrd, Torpey is still his biggest cheerleader.

When Byrd graduated from dental school, he didn’t celebrate alone. Torpey was right there with him, calling with congratulations and sharing the news on the HPU men’s lacrosse team’s social media accounts.

“To have that kind of support and motivation… that’s priceless,” says Byrd.

Campus Lessons to Carry You Forward

With the help of Torpey and Spain, Byrd had a plan. Support from professors in biology, psychology and chemistry armed him with the skills needed to meet dental school admissions standards.

More than that, the HPU campus community provided him with skills and an outlook on life that he knew would set him apart during dental school interviews.

“A lot of what made me attractive to dental schools was what I’d learned at HPU,” says Byrd.  “Understanding how to master communication and knowing the values of teamwork, hard work, time management, empathy, perseverance and selflessness made me an attractive candidate.”

Byrd was confident but humble.

The outcome? Admission to his number one choice, the University of Michigan School of Dentistry.

During the four years spent there, he carried the life lessons instilled by HPU with him every step of the way. Dental school wasn’t easy. Deciding to take his career a step further and become an orthodontist meant once again applying to challenging programs.

Yet, he did it. Now, Howard University awaits him.

Byrd says that if there’s one thing he wants to be remembered for, it’s his work ethic and his belief that hard work trumps anything else on the path to success.

“A lot of what I know now, I learned through High Point University,” he says. “I’ve failed plenty and been through strenuous tests and trials that could break a person down, but I’ve been able to work through them. That comes from the attitude I developed at HPU. I was empowered, strengthened and motivated, and I always come back to that mentality.”