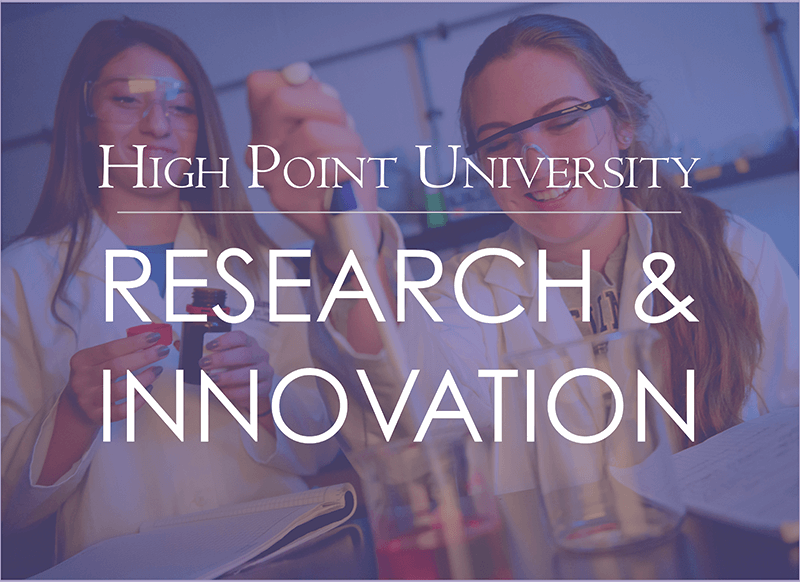 HIGH POINT, N.C., Oct. 22, 2021 – Members of the High Point University community frequently conduct, publish and share research and creative works in a variety of ways. Below is a recap of recent research initiatives.

HPU Professor and Alumni Discover a Periodically Disappearing Star System
Dr. Brad Barlow, associate professor of astrophysics, along with HPU alumni Kyle Corcoran and Stephen Walser, recently published a peer-reviewed paper on their discovery of a new, totally-eclipsing binary star system called Gaia DR2 6097540197980557440 in the Astrophysical Journal, the highest-ranked academic journal for astrophysics in the world by Google Scholar. This particular star system consists of a hot subdwarf star and red dwarf orbiting one another once every three hours at such a close distance the entire binary could fit inside the sun. It’s the only system of its kind to show such deep eclipses.

“This project and paper will forever hold a special place in my heart because of how this particular star was discovered,” said Barlow. “Stephen was in charge of monitoring our sequence of telescope images as I left the observing room for a moment. When I returned, Stephen was sweating bullets and apologetically told me he ‘lost’ the star in the image. Sure enough, when I looked at the most recent images, the star wasn’t there! But Stephen hadn’t lost the star. He had discovered a totally-eclipsing hot subdwarf binary system, in which the primary star ‘disappears’ every three hours when it’s blocked by its companion. His fear quickly turned into exuberance, and to this day we still laugh about that moment.”

Barlow and his team are currently studying dozens of systems like this to figure out what the lowest-mass object is that could strip a red giant’s atmosphere and survive the process. Their work will help determine whether planets as small as Earth might be able to survive the red giant stage of their host stars.

Pexa will conduct research to determine the validity of daily single-item athlete health measures. The study will recruit 100 student-athletes to complete daily measures of athlete health, including readiness to train, stress, sleep quality and fatigue. These measures are very common to track over time, but there is limited information about their accuracy, reliability or relationships with previously established constructs. To be truly effective, Pexa said the measurements must be investigated more thoroughly, and this study will help fill the current gap in knowledge.

“HPU students and staff will benefit from every aspect of this study,” said Pexa. “HPU undergraduate exercise science and graduate athletic training students will receive hands-on education about emerging athlete monitoring techniques and physical testing methods. HPU athletes will get data about their specific health and wellness to identify how it changes throughout a competitive season. Finally, HPU athletics staff will receive athlete health data to make appropriate changes to training, prescribe interventions to mitigate injury risk or alter plans to target specific student-athlete deficits that may impact performance. High Point University is the perfect environment due to its emphasis on academic innovation, interdisciplinary collaboration and experiential learning.”

HPU Faculty and Students Participated in research for NASA

Jeff Regester, instructor of physics and astronomy, and HPU student Jack Munn, a senior physics major, participated in a research expedition in support of NASA. The Southwest Research Institute, based in Boulder, Colorado, sent the expedition to Spain at the beginning of October to collect astronomical observations in support of Lucy, a probe that launched from Cape Canaveral on Oct. 16. Regester and HPU student David Vestal, who participated in a similar expedition previously, also attended the launch from Kennedy Space Center in Florida.

“The Lucy mission is a probe that will reveal much about the process of planet formation in the early history of our solar system,” said Regester. “The asteroids it will visit are leftovers from the formation of the planets. This mission is addressing one of the most fundamental questions we can ask: How did Earth come to be?”

Over the next 12 years, Lucy will visit eight asteroids in the outer solar system. On Oct. 1,  one of these asteroids, Polymele, passed directly in front of a distant star as seen from Spain. The exact timing of this “occultation,” both when it happens and how long it lasts, reveals the size, shape and reflectivity of the asteroid, and allows its orbital path to be determined to extreme precision, all of which are crucial to the success of Lucy’s future fly-by. Regester has conducted many of these occultation observations, using portable telescopes and fixed-site observatories, in the past and is delighted to include HPU students in this research.

More information on the Lucy mission can be found at http://lucy.swri.edu/.