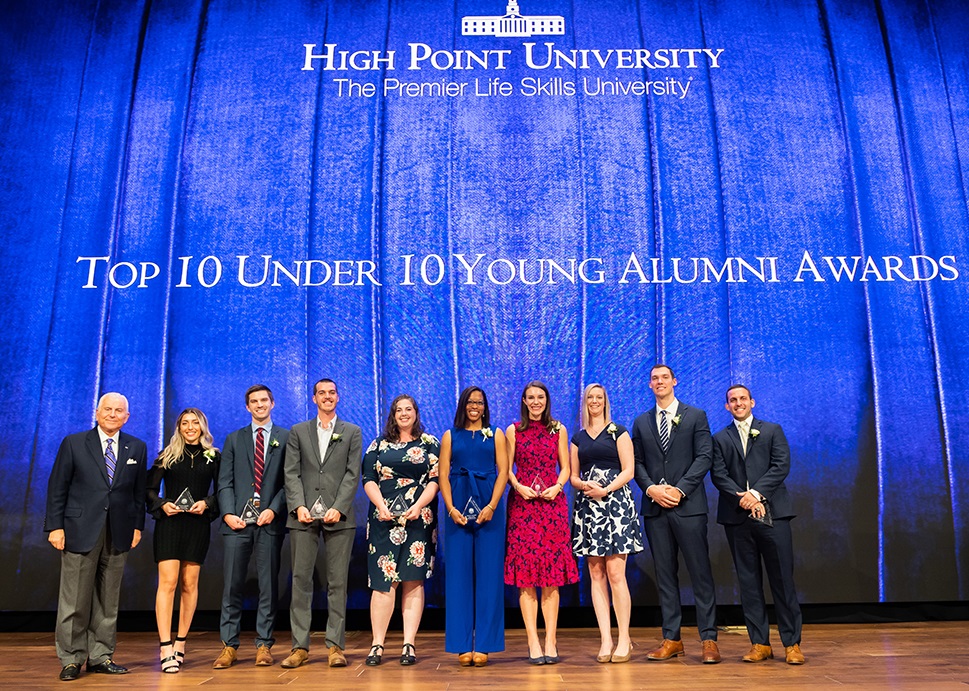 The highlight of the weekend is the annual Alumni Awards Ceremony. Hosted by the Alumni Association, the ceremony honored HPU alumni who have made outstanding accomplishments and demonstrated a commitment to their communities and the university. 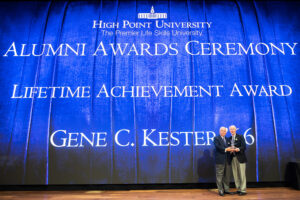 Kester was born in High Point and lived in a house on Fifth Street, which later became part of the High Point University campus. Cottrell Hall now stands there in its place. Kester graduated from then High Point College in 1966 with a Bachelor of Arts degree in history. As a student, he joined Delta Sigma Phi Fraternity and was a soloist in the University Choir.

Kester began his career as a salesman in High Point with Rose Furniture, the company owned and operated by his family. In 1974, he was hired as the first salesman for a new furniture company, Councill Craftsman. This began a 35-year career as an independent manufacturer’s representative for Councill, Southwood Reproductions, Yorkshire House and many other accessory lines.

Kester has served on and participated in numerous organizations and community boards, including the High Point Community Foundation, High Point Rotary Club as a Paul Harris Fellow and member for over 25 years, and as a member of the board of BB&T for 20 years. For 30 years, he has been a member of the High Point Historical Society and has served as a board member for seven years. Kester received the Mary Lib Joyce Award in 2016 for outstanding service, including his efforts during the campaign to relocate the Little Red Schoolhouse, where he attended first grade, to the campus of the High Point Museum. Kester is an active member of Wesley Memorial United Methodist Church in High Point. He has taught Sunday School and has been a member of the choir for many years. 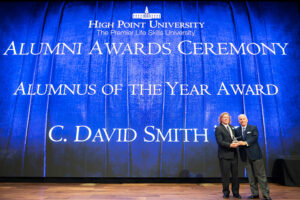 Smith was born in High Point and graduated from then High Point College with a Bachelor of Science degree in physical education. While completing his student teaching experience, Smith helped his brother coach the Ledford High School Football team in Thomasville.

After college, Smith joined his father in the family business, Smith and Jennings, Incorporated, a High Point-based company founded in 1947. Today, it remains family-owned and operated, employs more than 100 people and specializes in all aspects of the grading and utility industry. Currently, Smith is the owner and president. The company has helped HPU transform over the years, from assisting in the construction of Smith Library in the 1980s to the campus transformation that began in 2005 when HPU President Nido Qubein arrived.

Smith has remained active in the local High Point community by serving on various organization committees and boards. He has served with Big Brothers Big Sisters, Westchester Country Day School and the YMCA Advisory Committee. Currently, Smith is the chair for the High Point YMCA Association where he has been a member for the last six years. In 1996, he was named the YMCA Volunteer of the Year and was inducted into the YMCA Hall of Fame in 2002. He is a current board member for Communities in Schools and serves monthly with Feeding Lisa’s Kids.

Smith combines his passion for sports and his love for High Point University as an active member of the HPU Panther Club and a regular attendee at athletic games. The Smiths have supported HPU in various ways, including through the Spirit Garden at Millis Athletic Center and the annual HPU Prayer Breakfast.

In recognition of their most recent philanthropic gift, along with their long-time support and advocacy, HPU named the David and Amy Smith Hospitality Suite in the new Nido and Mariana Qubein Arena and Conference Center in honor of the family’s success in business and commitment to HPU. 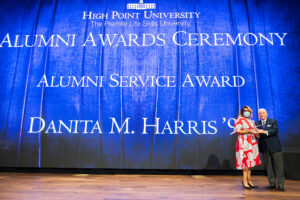 Harris began her career in High Point with a local furniture design company as a lead interior designer. After several years, she started a landscaping and design company. Later, she joined New York Life Insurance as an agent in New York City. In her first year, Harris received the New York Life Career Life Success Award, one of the most coveted awards for new agents. Currently, Harris is the managing partner of GUICE Wealth Management in New York City, where she leads the overall daily operation, including the origination and management of business development opportunities, client cultivation and retention, recruitment of staff, and long-term business growth.

In her community, Harris has been involved with various organizations. She has spoken at numerous events, conferences and for charities including the Steve Harvey Foundation; Boys and Girls Clubs of America; Women’s Basketball Coaching Association; St. Francis College in Brooklyn, New York; Dallas Children’s Cancer Society; the YMCA; University in Grenada, Spain; and many more. She actively works with numerous professional athletes and their foundations to teach financial literacy. 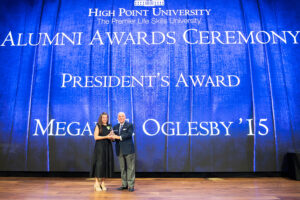 Oglesby graduated in 2015 with a Master of Business Administration degree from High Point University.

Oglesby began her career with Old Dominion Freight Line, a national LTL freight leader and global transportation company headquartered in Thomasville. After six years, she transitioned to Business High Point – Chamber of Commerce as the senior director of leadership and events, where she was responsible for Leadership High Point, Robert McInnis Golf Tournament, Women’s Business Luncheon, along with many other major Chamber events and sponsorships.

Since May 2019, Oglesby has served as executive director of the Earl and Kathryn Congdon Family Foundation. The foundation’s mission is to invest in organizations within the greater High Point area that promotes improved quality of life by reducing barriers to opportunity.

Each year, HPU also honors 10 young alumni who graduated within the last 10 years. This year’s Top 10 Under 10 are: