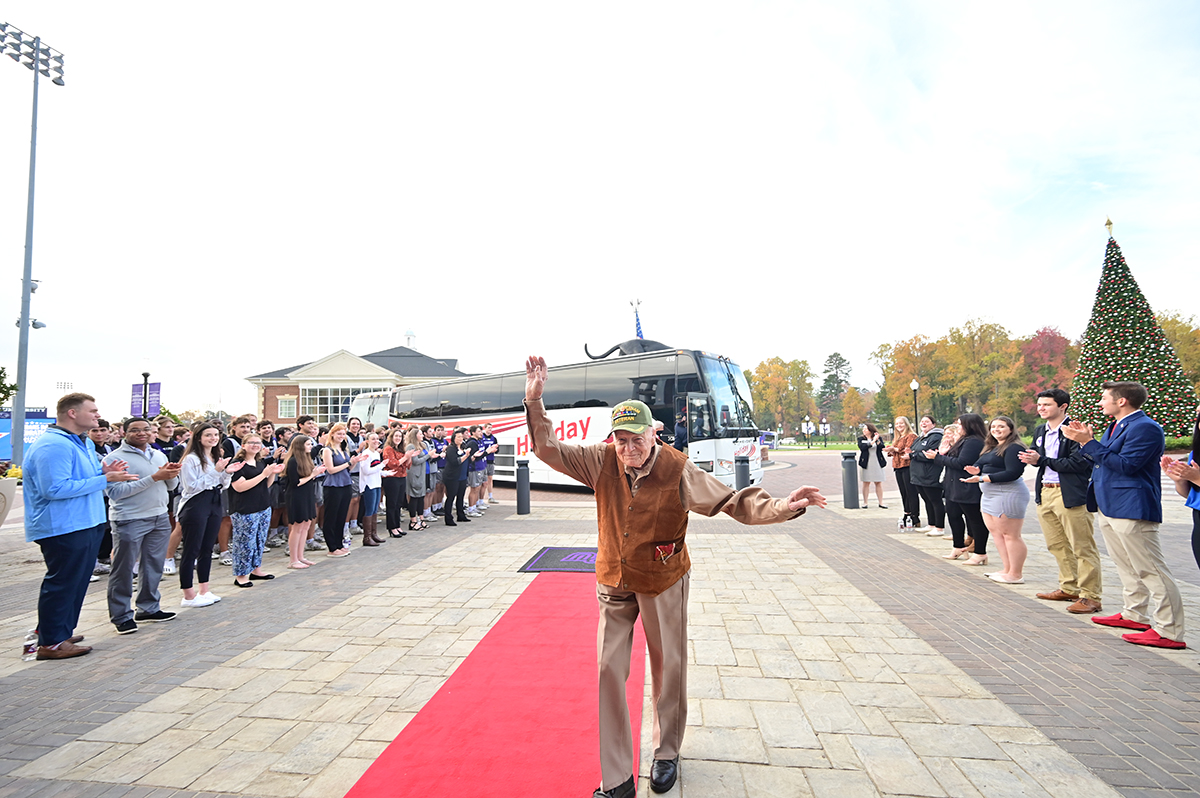 HIGH POINT, N.C., Nov. 11, 2021 – The men and women who have served our nation received a red-carpet entry and rounds of applause from High Point University students today as they arrived at HPU’s 11th Annual Veterans Day Celebration.

More than 1,200 people attended the event, which was held in the newly opened Nido and Mariana Qubein Arena and Conference Center. The celebration, made possible by 100 student, faculty and staff volunteers, included a complimentary breakfast, a patriotic salute, the revealing of two track chairs that HPU fraternity Kappa Alpha raised $40,000 to purchase, and much more.

HPU President Dr. Nido Qubein led today’s event, where he reminded the audience that HPU is a God, family and country institution.

“The environment here seeks to surround our students with heroes, models and mentors,” said Qubein. “We tell our students who you spend time with is who you become. Today, they’re face to face with you, veterans. What good is it to take a class on history and study the Vietnam War, Korean War or World War II if you’ve never met the veteran, shook his or her hand, and listened to their stories? Yes, veterans, we wanted you to feel welcome. But we wanted students to understand that their freedom happens because you were willing to sacrifice your life so this country can live on. When you teach students that, they remember.”

Retired Col. Vance Cryer, the senior manager for Lockheed Martin Missiles and Fire Control, served as the keynote speaker for the event. Col. Cryer served in the United States Marine Corps for 27 years. During his time of service, he deployed to the Arabian Gulf on six rotations since 1996 after completing his naval aviation training in 1995 and was a part of Operation Iraqi Freedom in 2003, 2004 and 2005.

Col. Cryer encouraged the audience to take action and give back to those who have sacrificed so much for our freedoms.

Star of Service and Sacrifice

New this year was the Star of Service and Sacrifice, a huge emblem that veterans were invited to sign.

“I think it’s really important as a nation to celebrate our veterans and to appreciate their service and sacrifice,” said Lance Collins, a United State Army Combat veteran. “At High Point University, they do an outstanding job to honor our veterans and to come together to support them.”

Veterans in attendance shared that this event makes them feel welcomed and grateful to those who take the time to honor their service.

“This celebration of veterans is so warming,” said Robert Kretlow, a Navy veteran.  “I always feel so honored to represent the men who weren’t given this opportunity, and this means so much to me.”

As is tradition, HPU donated approximately 100 American flags to local nonprofits, schools and government buildings. As one of the recipients this year, Marcus Gause, the principal of T. Wingate Andrews High School and son of a veteran, said the gift of American flags to his school is impactful.

“This means that we get an opportunity to celebrate those individuals who make America what America is,” said Gause. “Especially for me, my dad is a veteran, and the flag represents pride in our country.”

A Blanket that Symbolizes Comfort

“HPU students feel encouraged to show appreciation to people who have served our country for so long and have protected us overseas and in the United States,” said Katy Parisi, a senior and student volunteer. “We hope the veterans feel our appreciation and know that the values of God, family and country are being portrayed by the students, faculty and staff.”

HPU fraternity Kappa Alpha Order raised $40,000 to provide two track chairs to two wounded veterans through The Independence Fund. Known as Operation K.A.R.E., the brothers have raised funds through this initiative for the last five years.

The veterans were identified by The Independence Fund as people whose lives would be improved by the unique and durable track chairs, which increase outdoor mobility.

“One of the reasons why Kappa Alpha started doing this is because we realized there were many people our age already serving our country,” said Michael Esposito, a 2017 HPU graduate who started this initiative five years ago. “We wanted to find a way to give back to those who have given so much to us in a direct and meaningful way.”

The event was filled with many more patriotic moments. As a special surprise, a bald eagle named Clark flew over the crowd during the HPU Chamber Singers performance of “America the Beautiful.”

Veterans also had the opportunity to have their photo taken with the eagle.

HPU’s celebration of veterans, which has grown significantly over the years, is supported by the Sheriff Family Veterans Awareness Endowment, the United States Marine Corps Officer Program and Harvest Table.