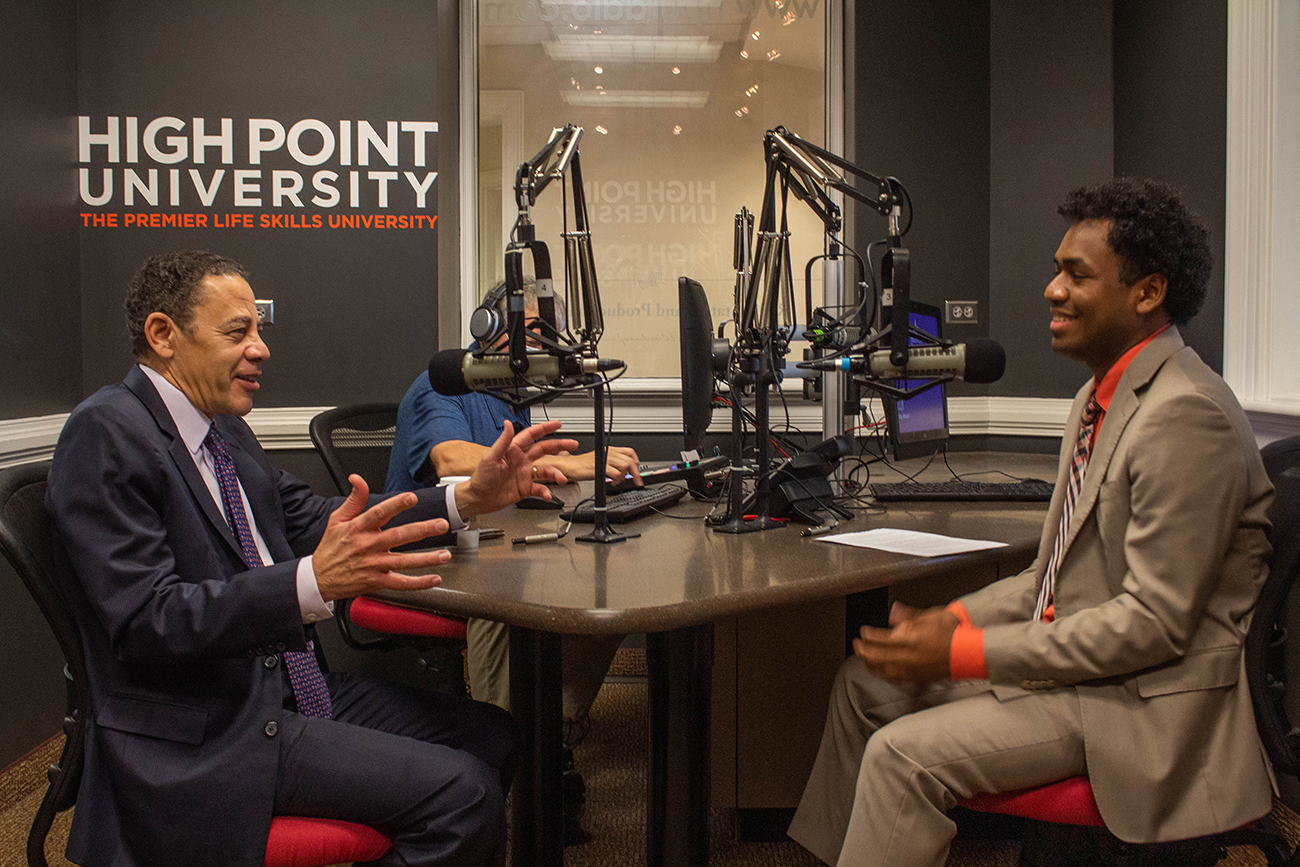 Kennard led two micro sessions with political science majors, spoke to a room full of students and faculty for a Life Skills Seminar, titled “Leadership and the Global Economy,” and mentored students during a Q&A on how to communicate effectively. HPU student Wendell Epps also recorded a podcast with Kennard.

In his first session, Kennard shared his story about advancing from a junior lawyer to a U.S. Ambassador. He also discussed the future of politics and shared advice for launching a career after college.

“I had a great mentor early on in my career, and he said to me, ‘The only way you can grow is if you get out of your comfort zone,’” said Kennard. “When you’re too comfortable, it means you’re not growing. This is something I internalized, and I hope you do too early in your career. You’ll have a more interesting life if you try different things.”

Sophomore McKenzie Kauffman was part of a small session with Kennard. She says she learned a lot from Kennard about pushing through challenges.

“I learned about fighting against social norms and some of the issues we have in our current society to make a positive change for our country,” said Kauffman, a political science and Spanish major from Orlando, Florida. “I’m going to push myself to be challenged more. I’m hoping that will lead into my future career.”

Kennard shared with the audience during the Q&A that it was in one of his college classes that he became interested in communication policy. He also answered students’ questions about his experiences working as a former U.S. Ambassador to the European Union and the people in his life who helped him get there.

“The reason I became a U.S. Ambassador is because I had a friend in Washington who went to school with Barack Obama,” said Kennard. “My friend introduced me to him when he was a senator, and I would not have been an ambassador if I hadn’t met him and if I hadn’t been prepared. The most important thing you can do now is be prepared. Be prepared for that person you will meet and who will be in a position to help you get a job or do something significant in your life.”

“William Kennard was able to bring real-world experience to many of the topics we discuss daily in my political science classes,” said Hannah Nemanic, a senior from Latrobe, Pennsylvania. “I enjoyed hearing his unique perspective on U.S. diplomacy and the state of the world. I am grateful to High Point University for providing me with access to global leaders.”

Kennard currently serves as the chairman of the Board of Directors of AT&T, Inc. He also serves on the boards of Yale University, MetLife, Inc. and Ford Motor Company.