Study engineering at High Point University, and you’ll work hard—maybe harder than you ever have in your life—and you’ll love it.

“This is not an easy program,” admits Dr. Michael Oudshoorn, founding dean. “Invest four years of your life, study hard, and you’ll get a good degree and a career that can last you a lifetime.”

What does it take to succeed in the Webb School of Engineering?

What Engineers Really Do

HPU is the sort of place Elon Musk, Tesla CEO and product architect, had in mind when he said, “I think it is possible for ordinary people to choose to be extraordinary.” 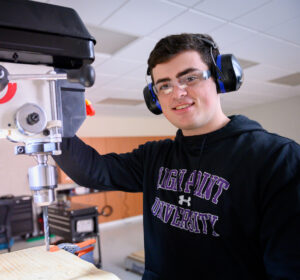 But what exactly do people with those degrees do?

Engineers help people solve problems. They can range from building electrical and computer systems on spaceships to designing medical sensors and software that save lives.

There’s another surprise. Being a good engineer means more than solving math and science problems. Being successful in engineering takes people skills.

“You have to be a good communicator to be a good engineer. At HPU, you’ll learn how to speak and write well and understand the ethical implications of your work,” says Oudshoorn.

How do you know which engineering discipline is right for you? Consider your smartphone, suggests Oudshoorn.

“If you wonder how apps work, you’re probably right for computer science,” he says. “If you’re curious how chips and circuits function, electrical engineering might be for you, and if you wonder what happens when you push a button (the interface between the app and the hardware), computer engineering could be your thing.”

The engineering school is housed in a completely reimagined building. It occupies a central position in HPU’s Innovation Corridor. That’s where $350 million has been invested in faculty, facilities and technology to boost the university’s STEM programs.

Apple Co-Founder and electrical engineer Steve Wozniak plays a key role on the engineering school’s advisory board. He’s also HPU’s Innovator in Residence. This year, he’s mentoring engineering students working on a brain-computer interface. They’re building a toy car that is remote-controlled by a driver whose headset reads their thoughts.

Wozniak’s involvement is the real deal. He comes to campus. He meets engineering students and other groups. He answers their questions. When he’s not at HPU, he trades emails with students to offer them his ideas, feedback and encouragement. Bottom line: He stays in touch.

“I am always reachable. You have full access to me,” he told students in a recent session. “If anything comes up, we could do a Facetime — or whatever — because it’s for you.”

Students in the HPU cybersecurity program rank among America’s best in national cybersecurity contests. No wonder — they train in a world-class lab. It’s called CELF, the Cybersecurity Engineering Learning Facility, a space that’s open to all students. This advanced networking facility cost half a million dollars, a rare find in undergraduate programs. In fact, most schools don’t even have an undergrad cyber program.

“Other schools rent their servers, which creates restrictions on what you can do. Here, we get our own virtual machines where we can experiment and apply what we learn in a real-world context. It’s very unique.”

The man who runs CELF is Dr. Jason Pittman, an associate professor of computer science.

“I don’t know of any other university that has anything like this. This is, in all sincerity, world class,” he says.

He thinks of the lab as a sandbox where students can play, feel free to fail and learn by doing.

“To the engineer falls the job of clothing the bare bones of science with life, comfort and hope.”

“Think about little kids. Put them in a sand box, and they come up with all kinds of cool, crazy stuff. The power of that is as they create, they learn,” he says. “It’s a very strong feedback loop for students.”

Pittman also runs the award-winning student cybersecurity club. When telling students what to expect in an upcoming regional competition, he sounds like Tom Cruise briefing his team about their next Mission Impossible.

“You’re on your own. It’s going to be rigged 100% against you,” Pittman warns. “You’ll be dealing with very sophisticated, coordinated attack teams. Imagine you’re the gazelle, and you don’t see the lion coming, and you wake up, and the lion is on top of you. Now there’s an exhilaration to that, right? It’s fun!”

His message gets more hard core when he connects the cyber contest to the world after graduation.

“One day in the near future,” he says, “you’re going to apply for an internship or your first entry-level job. You’d better start preparing now. If you want to win, you have to make the necessary sacrifices. You’ve got to take this seriously and approach this as though it’s your sole purpose in life.”

Employers want to hire engineers who have real-world skills.

“You can learn theory at any school,” says Oudshoorn. “But here at HPU, we have a hands-on focus. The strong work ethic you’ll learn here is what employers want, and it will really pay off when you’re looking for employment.”

That personal touch is constant at the engineering school. Students get quick, easy access to professors.

“We have a very caring faculty,” says Oudshoorn. “If you’re struggling, you’ll get extra support, access and personal relationships with professors you need to succeed.”

“What separates HPU from other schools is that here you’re not just a number,” adds Emily Lattanzio, a junior in computer engineering who likes to code and build circuits. “My professors know me. They know my name.”

In her Digital Logic class, Lattanzio wrote software she used to program a chip and then built a circuit. “That was really exciting,” she says. Detushev loves that the program is hands on.

“We designed and made 3D models through a CAD (Computer Assisted Design) program where we learned to create virtual models. It was pretty cool,” she says. “You do real-life measurements and then you create an exact replica on the computer and 3D print it.”

This action happens in the MakerSpace, a state-of-the-art workshop outfitted with a rich collection of the latest high-tech gear — computer-controlled routers, a laser cutter, saws, 3D printers, and a computer-controlled sewing machine to build electronics into garments. MakerSpace is where students studying different disciplines learn to work with each other.

students build the car, computer science students handle telecommunications to the device, and all three groups must work in harmony.

“It’s a challenge, but that’s what I really like about the program,” she says.

The long hours and hard work go smoothly, thanks to what she says is “a very tight-knit student community. Engineering students know they can always rely on each other, and we can go to our peers for help.

Steve Wozniak co-founded Apple Computer. Now he helps HPU engineering students build the foundations of their lives and careers. As HPU’s Innovator in Residence, he’s part of more than a dozen legendary figures from business, sports, media, arts and other fields who share their time, advice and support with students.

“I honestly didn’t know what to expect,” says engineering major Nichole Detushev about interacting with Wozniak for the first time. “It was really cool to see how someone in such a high position thinks and that he took the time to talk to college students.”

Wozniak, who is an electrical engineer, is mentoring engineering students who are designing a headset-controlled, brain-computer interface that will let the thoughts of student users drive a toy car. 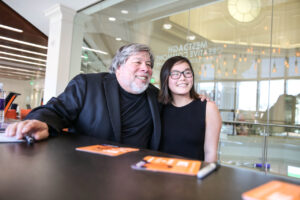 “This is the sort of cool thing I would have done when I was young before I got to Apple,” he told students. He said the project intrigued him so much he bought his own headset.

During their recent session with Wozniak, students fired off questions like: “How much processing power will we need?” “How do we filter out subconscious thoughts?” “What advice do you have based on your own thought-control experiences?” and “What safety issues do you foresee?”

Wozniak gave answers and inspiring advice — “Hard work is more fun than anything. When work is fun, you enjoy doing it.” He also shared: “Don’t expect to go fast — that’s my experience with these brain-thinking things;” and “Keep the project joyful.”

Detushev came away with a new perspective on creating.

“He emphasized that he loves to go into detail on every project, take baby steps, not rush and figure out basic concepts. We’re always told we should start with the basic concepts, and for him to emphasize that was a cool experience,” she says.