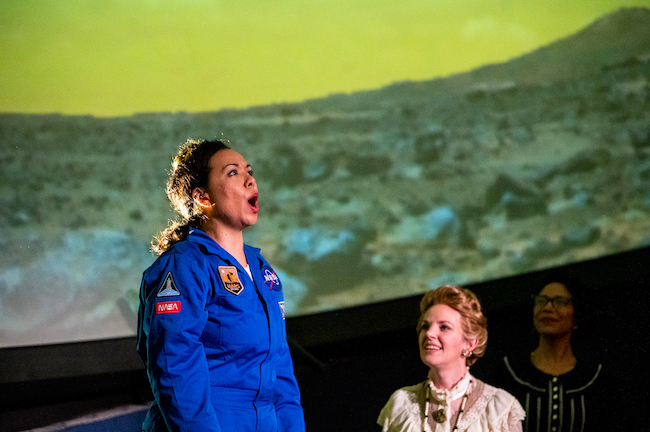 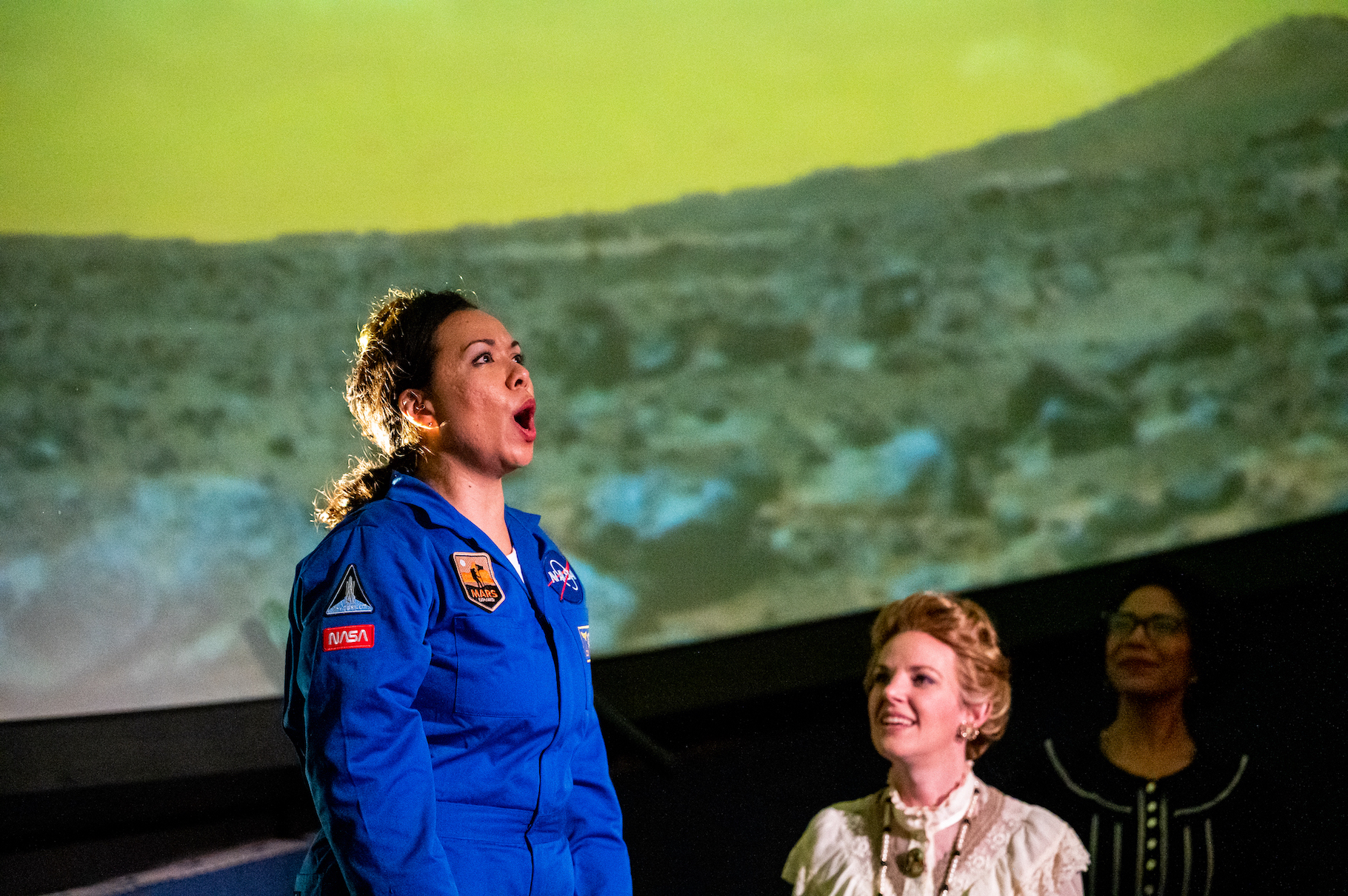 A collaboration of science and art brought dreams to life inside this one-of-a-kind venue.

With its 50-foot dome and five surround-sound speakers, the Culp Planetarium brings anyone who sits down into a world as deep as the ocean to as high as the Milky Way and beyond.

The images are breathtaking, and the audio makes everything seen and sensed feel inches away. Meanwhile, in a 125-seat auditorium where the headrest encourages everyone to look up and around, the room introduces any observer to beauty rarely seen or imagined.

The Culp Planetarium also became something else –– a history maker.

For the first time in its 425-year history, an opera was created specifically to be performed in a planetarium. And the place chosen was the Culp Planetarium.

In April, High Point University unveiled in the Culp Planetarium the world premiere of “Galaxies in Her Eyes,” an opera about a young girl’s love for space and how three famous women scientists influenced her to reach Mars.

The five-performance run brought to campus quite the experts in opera – an internationally renowned director; an acclaimed composer, librettist, and graphic designer; four professional opera singers; and the assistant conductor and five musicians from the Winston-Salem Symphony.

Because of the pandemic and HPU’s Dr. Scott MacLeod. 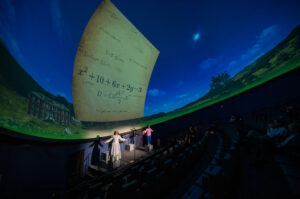 A ‘Beautiful Marriage’ of Science and Art

In March 2020, when everything shut down, MacLeod has his first artistic break in two decades. MacLeod, an associate professor of music, called a friend to bat around potential ideas and heard, “Let’s do something we’ve never done before.”

MacLeod brought up the planetarium, and that led him to connect with veteran stage director Kristine McIntyre. She had directed more than 100 operas, and she enjoyed creating productions in what she called “found spaces.”

When MacLeod told her about HPU’s Planetarium, she immediately thought about three women scientists: Annie Jump Cannon, Katherine Johnson, and Ada Lovelace. She always wanted to put together a production about their incredible discoveries, and she knew she could bring in a cadre of talent.

Now, she had a space to create an opera where it had never been done before.

MacLeod then approached Dr. Brad Barlow, HPU’s associate professor of astrophysics and director of the Culp Planetarium. Barlow has played the piano for decades, and he creates his own soundtracks to the videos he produces when he takes his students to study stars at an observatory atop a mountain in Chile.

“Boy, do I have something for you,” MacLeod told him.

Barlow loved the idea. Barlow secured a $4,500 grant from the National Science Foundation and worked with opera experts to make sure the science portrayed in “Galaxies” was accurate.

He teamed up with a graphic designer in Minnesota and a librettist in California. Then, like an artist with a paintbrush, he worked with the planetarium’s software and helped create such backdrops as a space capsule landing on the actual landscape NASA photographed of Mars.

Barlow calls this work a “labor of love” and the most important project he’s ever done.

“This is the most beautiful marriage of the arts and science I’ve ever witnessed,” Barlow says. “I’ve always had a passion for telling a story around music, and this fulfills a childhood dream.”

But “Galaxies in Her Eyes” wasn’t Barlow’s first marriage of arts and science inside the Culp Planetarium. It was his second. 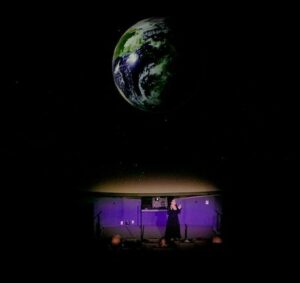 ‘It Does Make You Gasp’

Two years ago, with Barlow by his side, Putnam walked into the planetarium and exclaimed, “There is storytelling in this space!”

But Putnam had to figure out what story he wanted to tell. Putnam directs plays; he doesn’t write plays. But in March 2020, when learning went virtual after his students had to leave campus because of the pandemic, Putnam began spending a lot of time with his young daughter, Maggie.

At the time, she was 4. He took her to the park, he played with her at home, and they walked together through their neighborhood with Greta, their golden retriever. He started thinking about the relationship between a father and a daughter and the aspect of time.

Time. Past and present. A play with that kind of theme, he felt, would work well in the Culp Planetarium. That’s when he pulled out his laptop and spent months creating “Time Like Water.”

He wrote about why a woman in college initially steered clear of getting married because of her fear of loss following the death of her father. He wrote on his couch. He wrote in parking lots. He revised and revised again until his pile of drafts reached six inches high.

He collaborated with Erin Brady, the planetarium manager. Brady, an HPU alumna who majored in physics and studio art, worked with Putnam and the cast and spent many late nights and weekends making sure the images on the dome fit the script and the work onstage.

But that wasn’t all. Putnam also collaborated with the planetarium itself.

“You get in there, and you’ve got toys to play with,” Putnam says. “It does make you gasp.”

It did for the audience and the actors during the show’s run in February.

“The planetarium made it a better show,” says Hannah Hutter, the junior broadcast journalism and criminal justice double major who played Nina, the play’s main character. “If we did that show on a stage, it wouldn’t have the emotional depth. But having it produced in the planetarium, you were truly transformed as a member of the audience.

“You were there with us,” she says. “I know it sounds totally cliché, but it reminds of that phrase, ‘Oh, the places you will go.’ The potential for that space is limitless.”

MacLeod believes that, too.

“With what we’re able to do in our planetarium, I see it as so rewarding on a personal and artistic level.” McLeod says.  “Our students are getting a real-world perspective of the arts, and through the arts, we have a rare and opaque window into the human soul we don’t have otherwise.”

The Life Lessons of ‘Galaxies’

Other opera companies nationwide are interested in producing “Galaxies in Her Eyes” in a planetarium. Meanwhile, the opera has garnered support from National Science Foundation and NASA because they see the production the spark needed to interest young people in STEM, the well-known acronym for science and technology, engineering, and math.

And by telling the story about women scientists of color in such a compelling way, Barlow sees the opera as a production that could encourage young girls and students of color to pursue their curiosity in STEM.

“It goes to show you the importance of being able to see yourself in that role and being able to interact with other people who look like you,” says Barlow, a married father of two girls no older than 4.

Reyna Alston, a junior music major from Durham, North Carolina, understands that. She’s one of the voice students MacLeod recruited for a class to help workshop the script and the score from “Galaxies” last semester.  She played Eden, the opera’s main character.

“Her story resonated with me,” says Alston, who wants to pursue a doctorate and chair a music department at a university one day. “I don’t see a whole lot of people who look like me who want to do what I want to do. I have big goals. So did she.” 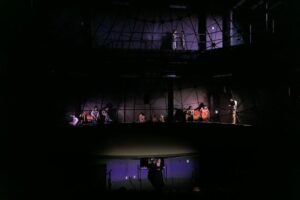 “We wanted to do it justice,” she says. “And for me, it was more than a musical performance. It’s about women overcoming obstacles to become a part of history, and all of us were women working together during  COVID, when other arts ceased to create.

The Life Lessons of Culp

At HPU, The Premier Life Skills University, timeless lessons about the importance of resilience do stick with students.  But what’s ironic for students majoring in theater –– those lessons were learned in a place they hardly ever entered.

The Wanek School of Natural Sciences. And its Culp Planetarium.

Becca Korn, a senior from Potomac, Maryland, double majoring in theater performance and computer science, remembers. In February, she played the teacher and the celebrant in “Time Like Water.”

“When Jay told us about the planetarium, I was like, ‘Oh jees, the science building?’” she says. “We were all theater kids, and we don’t go into that building, and we figured we’d feel out of place.”

They didn’t. Like Alston and Stone, Korn discovered a life lesson inside Culp Planetarium that she’ll use for the rest of her life.

“It’s adaptability,” she says. “That’s huge in the theater world. You sometimes have jobs where you go out onstage at different points with zero rehearsal and make things work with a new script. So, when you get that experience in college –– and not for the first time in the job market –– that really helps.”