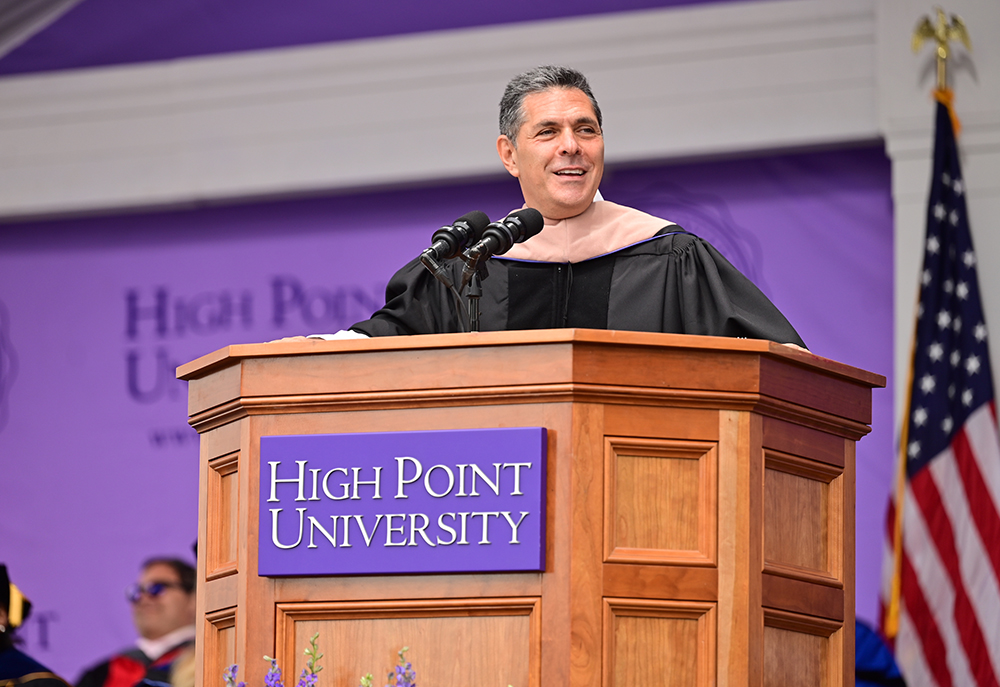 This is the largest graduating class in HPU’s history at nearly 1,400 graduates.

HIGH POINT, N.C., May 7, 2022 – This morning, nearly 1,400 graduates crossed the stage at High Point University for the Class of 2022 Commencement ceremony, representing the largest graduating class in HPU’s history. More than 14,000 family and friends filled the Roberts Hall Lawn to congratulate the graduates and learn from this year’s Commencement speaker, Daniel Lubetzky, the founder of KIND Snacks.

Lubetzky is a social entrepreneur working to build bridges between people and to increase appreciation for our shared humanity. He has also appeared on ABC’s hit TV show “Shark Tank,” and is the author of The New York Times bestseller “Do the KIND Thing.”

“How we act along our daily journey ultimately impacts society in much deeper ways than any of us ever acknowledge,” said Lubetzky. “Here’s my core piece of advice: We need to adopt daily habits rooted in Curiosity, Courage and Compassion. The three C’s To Excel Every Day in Life. It may seem simple but it’s seriously hard work. The easier path is to surround yourself with those who tell you what you want to hear rather than what you need to hear. Opt instead for curiosity. Think critically about everything. Develop the courage to have uncomfortable conversations – the only kind that will help us all grow. The courage to collaborate across lines of difference. Relate to others with compassion. Assume positive intent. Put yourself in other peoples’ shoes. Be more forgiving.”

Lubetzky encouraged students to practice kindness daily because “good habits can cause a massive ripple effect of positive transformation.”

“If we join forces to treat each other with compassion, courage and curiosity, always working hard to unlock the truth of this human experiment we call life, think of what an amazing world we’re going to create,” said Lubetzky. “You know why you should be enormously energized today? Because the stakes are so high, and you have the power to make a huge difference. We must all join forces in shifting our culture back to what makes our country so great. To reknit the social fabric of kindness that underlines our nation’s greatest achievements. Your generation will lead it. We will all be with you every step of the way. It starts today as all of you graduate. It starts with every one of you. It starts with all of us. Class of 2022, let’s go and steer this ship.”

Dalton Lucas, HPU’s senior class president, a Bonner Leader from Virginia who majored in political science, shared words of wisdom with his fellow graduates as he reflected on the last four years at HPU.

“We have been given an abundance of opportunity throughout our time here,” said Lucas. “Not only did we receive an extraordinary education, but we were mentored by and learned from faculty and staff who cared for not only our futures, but our overall well-being. The people here have ensured we are set up to leave prepared for the world as it is going to be and we are all well equipped to take on that world. Luke 12:48 tells us, ‘To whom much is given, much will be required.’ I want you to think about those words. We have been blessed with much knowledge, many talents and skills. It is now time to put those skills into action.”

Lubetzky is the first HPU Commencement speaker to be presented with an Honorary Doctor of Entrepreneurship by HPU.

“It is rare that we do what we are about to do on this stage this morning,” said HPU President Nido Qubein. “The Board of Trustees at High Point University proudly today has chosen Daniel Lubetzky as a recipient of the coveted and rarely bestowed honorary doctorate. We present this distinguished honor in appreciation for your humanity efforts and admiration of your business achievements.”

As is tradition at HPU’s graduation, a bald eagle soared over the graduates at the end of the ceremony to symbolize the ideals of free enterprise, independence and the ability to pursue new opportunities in America. And every graduate received a blanket after the ceremony to give to their mothers in honor of Mother’s Day.

On May 7, graduates also received a powerful Senior Send-Off from HPU President Nido Qubein, who encouraged them to put into practice the life skills with which HPU equipped them.

“Do not underestimate, students, the power of life skills that has entered your soul,” Qubein told a packed audience. “You will not understand it fully until a few years have passed. You will look back on this journey time and again and say, ‘I learned that when I least thought I was learning it at High Point University.’ That’s why we’re the Premier Life Skills University. That’s why we insist that you get knowledge inside the classroom, but we insist that you understand it outside the classroom, too.”

“I want to talk about your generation’s role in steering humanity in the right direction. The ship of humanity is moving in the wrong direction, and it will be upon all of you to steer it back on track.”

“While your individual actions may feel small, all of us practicing good habits can cause a massive ripple effect of positive transformation. My father credited his survival during the Holocaust to a German soldier who threw a potato by his feet when nobody was watching. It was not just the nourishment that half rotten potato brought to my father. It was the German solder’s courage to recognize my dad’s humanity. It’s probably what made my dad remind himself that he was human and had to carry on.”

“The unprovoked invasion of Ukraine has marked one of the greatest assaults on the free world since World War II. This level of disruption is overwhelming, even paralyzing. But it comes with enormous opportunity. Chaos is a catalyst for us to step into our agency because just as you are entering the world, our world is re-entering history, and you can help write its most epic chapter.”

“Dr. Qubein, you inspire insatiable curiosity in your students and have the ability to connect with everyone around you at a deeply human level. You have helped grow High Point University into the Premier Life Skills University and built a culture in which students feel welcome and cared for by their peers, faculty, staff and broader community.”

“If you think about it, what else can have more impact in society than how we relate to one another? We’re ultimately a product of our daily interactions. We can be jerks throughout the day, or we can smile a little bit more. Listen a little bit more. Care more. When you look back at who you have become 30 or 50 years from now, a lot will come from how you interact with others, from all those little moments. How you act along that journey will become your destination as a human being, and so too for the course of history.”