HPU Poll: Most North Carolinians Are Celebrating Halloween This Year 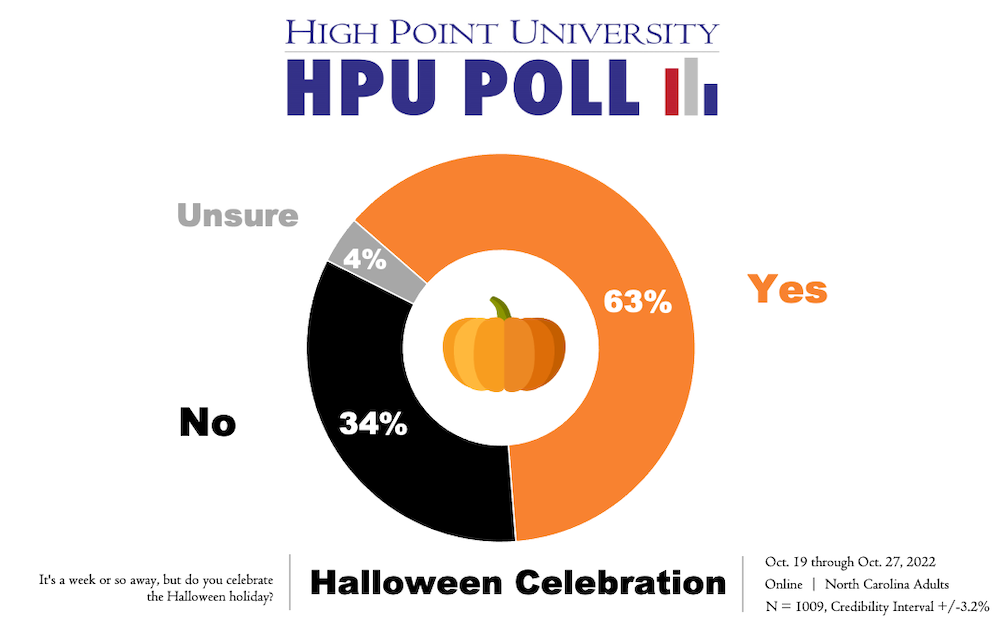 HPU Poll: Most North Carolinians Are Celebrating Halloween This Year

For those who will celebrate, the median for spending is $30, which includes money spent on costumes, decorations, candy and food and drink.

“According to our recent poll, most North Carolinians will be watching a scary movie this Halloween,” said Brian McDonald, associate director of the HPU Poll and adjunct instructor. “The poll also gave insight to what candies are most favored by North Carolinians, with M&M’s and Reese’s Cups at the top of the list.”

The most recent HPU Poll was fielded by the High Point University Survey Research Center on Oct. 19 through Oct. 27, 2022, as an online survey using a panel of 1009 North Carolina respondents recruited and maintained by Dynata. Dynata sent invitations to its panel of NC respondents and the SRC collected responses on its Qualtrics platform. The SRC did all data analysis. The online sample is from a panel of respondents, and their participation does not adhere to usual assumptions associated with random selection. Therefore, it is not appropriate to assign a classic margin of sampling error for the results. In this case, the SRC provides a credibility interval of plus or minus 3.2 percentage points to account for a traditional 95% confidence interval for the estimates (plus or minus 3.1 percentage points) and a design effect of 1.1 (based on the weighting). The data is weighted toward population estimates for age, gender, race/ethnicity and education based on U.S. Census numbers for North Carolina. Factors such as question wording and other methodological choices in conducting survey research can introduce additional errors into the findings of opinion polls.

Further results and methodological details from the most recent survey and past studies can be found at the Survey Research Center website. The materials online include past press releases as well as memos summarizing the findings (including approval ratings) for each poll since 2010.