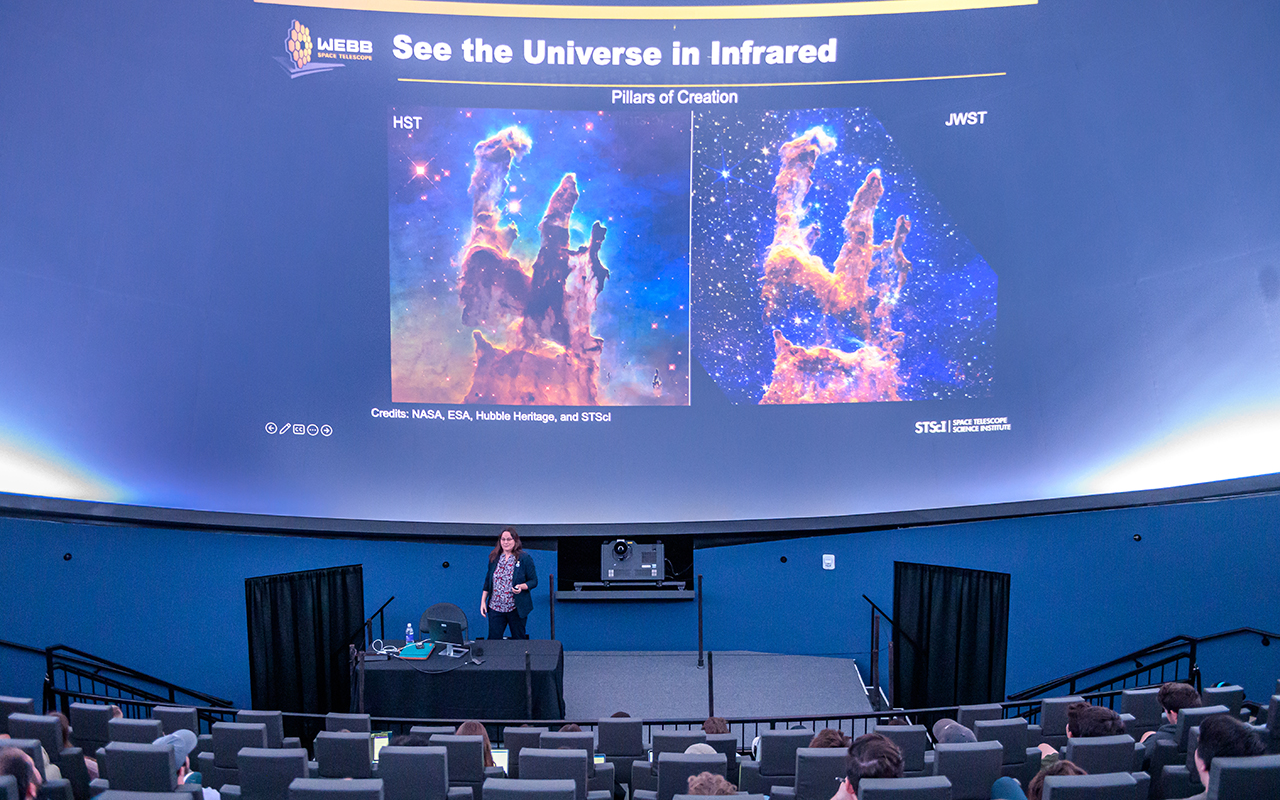 High Point University students got a glimpse of how scientists study the planets and stars through a presentation by Dr. Susan E. Mullally, the deputy project scientist for NASA’s James Webb Space Telescope. Here she’s comparing the views scientists can see via the Hubble, left, and Webb space telescopes.

HIGH POINT, N.C., Nov. 10, 2022 – High Point University students got a glimpse of how scientists study the planets and stars through a presentation by Dr. Susan E. Mullally, the deputy project scientist for NASA’s James Webb Space Telescope. This was one of the many activities during HPU’s Homecoming Weekend from Nov. 4-8.

Mullally described the capabilities of NASA’s newest observatory as she addressed an audience of students and faculty at the HPU Department of Physics’ colloquium Nov. 4 in Culp Planetarium. Launched on Dec. 25, 2021, the telescope is observing the universe at a higher precision and resolution than ever, she said. Mullally also reviewed how the Webb Space Telescope allows scientists to survey, for the first time, the physics and chemistry of giant planets as well as smaller ones to determine whether terrestrial extrasolar planets have atmospheres like our own solar system.

“You probably remember in July when NASA released the first handful of images from the James Webb Space Telescope, so it has captured the hearts and minds of everyone and hopefully inspired many students to pursue STEM disciplines,” said Dr. Brad Barlow, associate professor of astrophysics and director of the Culp Planetarium.

President Joe Biden had wanted to release those first images, Mullally said, so the scientists she works with at the NASA-funded Space Telescope Sciences Institute in Baltimore, Maryland, went to the White House to explain images the telescope had captured the day before.

“What you’re looking at in this image are thousands of galaxies in the universe that are 13 billion lightyears away,” said Mullally as that initial image lit the planetarium around her. “We’re going to be talking about the whole universe today and it’s going to be hard sometimes to keep track of the scales. In fact, at times we’re going to be talking about some things that are just the distance between the sun and the earth, which is miniscule compared to how far away these galaxies are.”

The primary mission of the Webb Space Telescope was to look for the first stars and galaxies that formed in the universe, said Mullally. In addition to looking back, the telescope allows scientists to study ways the universe continues to expand.

Jenna Mastropolo, a sophomore double majoring in physics and chemistry, said she had attended a conference last month in Washington, D.C., and heard a speaker discuss atmospheric chemistry.

“Listening to her speak now about exoplanets and their atmosphere really interested me,” Mastropolo said. “It filled in some of the gaps for me, and I think that’s what I want to go into now.”