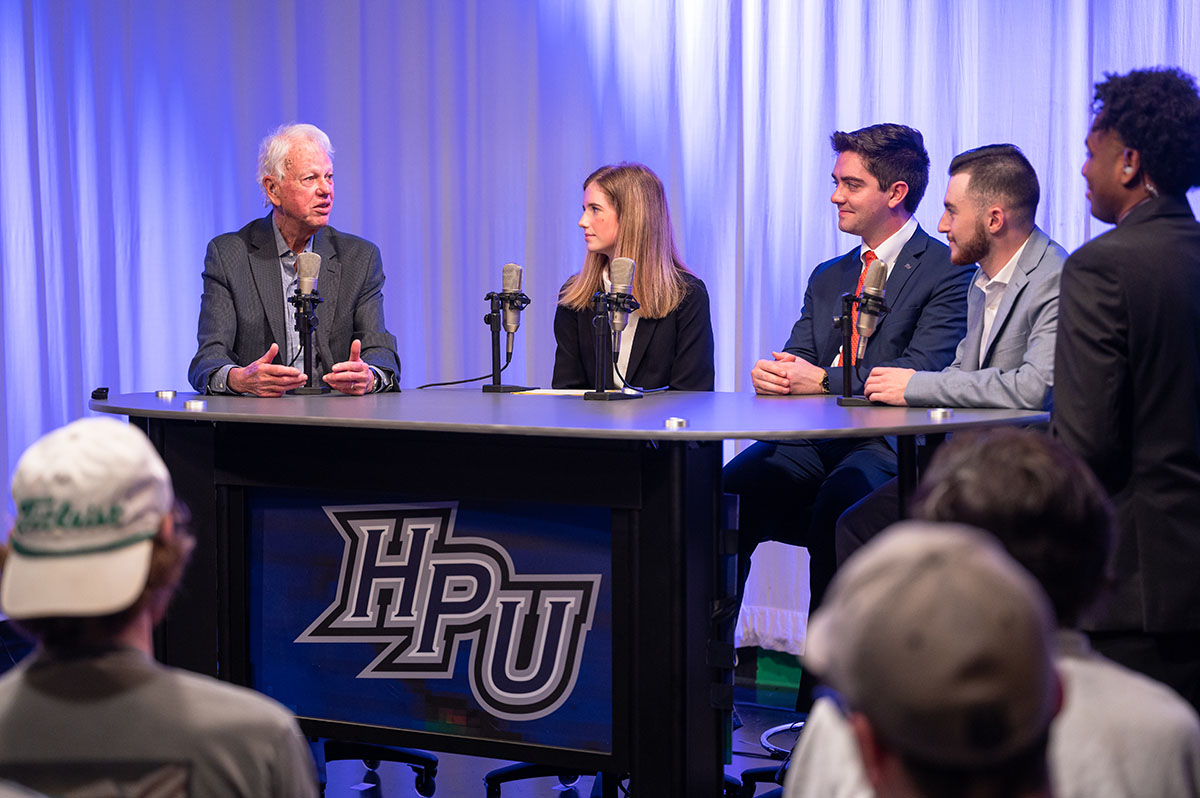 High Point University students were mentored again by Bob Ryan, retired sports columnist for The Boston Globe and HPU’s Sports Reporter in Residence, on Nov. 29 and 30 as part of the Access to Innovators Program. From left are Ryan, junior Megan Hovey, and seniors Josh Noel and Danny Shay.

HIGH POINT, N.C., Dec. 5, 2022 – High Point University students were mentored again by Bob Ryan, retired sports columnist for The Boston Globe and HPU’s Sports Reporter in Residence, on Nov. 29 and 30 as part of the Access to Innovators Program.

Ryan spoke to different classes within the Nido R. Qubein School of Communication, including sports reporting, sports broadcasting, and sport and communication. Students asked him a variety of questions regarding his decades-long experience covering major sporting events and what he learned from it.

“You need to know the difference between good and bad writing, but also good and great writing,” said Ryan. “Once you find something that is deemed great, it will be merited and not exaggerated. At the beginning of my career, I tended to overpraise in my writing, and I eventually was brought back down to earth.”

He also shared what makes a good writer when it comes to writing a column.

“These writers do have opinions, have good ideas and know how to marshal their thoughts in a way to make their case,” added Ryan. “To be a good columnist, you also have to have a sense of history.”

Senior Wendell Epps spent the entire day with Ryan around campus, getting to learn from one of his mentors and gain wisdom from Ryan’s many years in the sports industry.

“It was a privilege doing this, and I felt so much more confident this year speaking with Bob Ryan,” said Epps, a sports media major from Fairfax, Virginia, who also met Ryan in past visits to HPU. “The opportunity to have someone like him, with his legacy and knowing so many people, is unmatched. Every time I’ve talked with him, I’ve never had any doubts about pursuing a career in sports media. He has shown me how much fun you can have with it if you have a passion for it, do your research and practice as much as possible.”

Ryan also advised students who are part of the Qubein School of Communication’s Advisory Board and students in the NSMA (National Sports Media Association) chapter.

Junior Megan Hovey was part of the student-led live sports broadcasting panel on Nov. 29, which included Ryan as one of the panelists. She says underclassmen should not miss opportunities to network and learn from the best in their respective fields.

“HPU gives us so many experiences to interact with these innovators, and it’s so important to make an investment in yourself by speaking with them,” said Hovey, a sports media major from Canandaigua, New York. “Being in the same environment as them, hearing their experiences and wisdom could be influential. You could learn something that could really impact your career.”

Ryan concluded his visit to campus by cheering on HPU’s Men’s Basketball Team during the Nov. 30 game in the Nido and Mariana Qubein Arena and Conference Center.