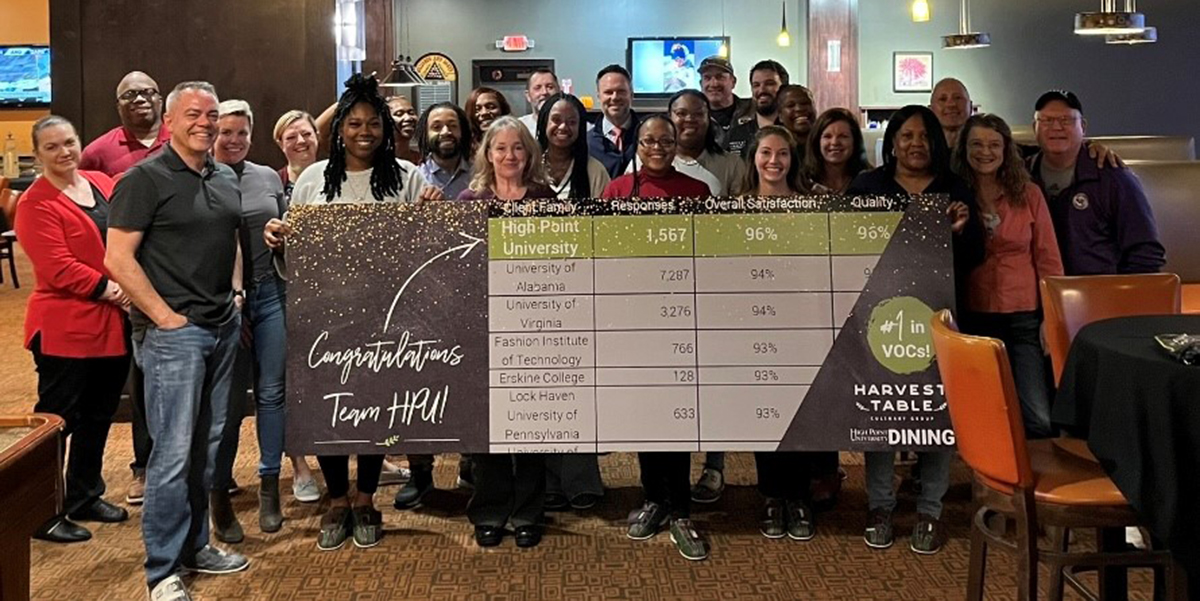 Pictured are HPU dining employees celebrating the good ratings they received during a team event in November.

HIGH POINT, N.C., Jan. 24, 2023 – High Point University’s Dining Team won first place in an annual survey from Aramark, a national food service company. This is the 11th consecutive year that the university has been ranked No. 1 in the nation.

“We received a 99% rating of satisfaction on the meal plan/campus dining,” said Kevin Summers, executive director of hospitality for Harvest Table Culinary.

Harvest Table is a division of Aramark, which fielded the survey in October on more than 300 of the college campuses it serves across the nation. Approximately 800 HPU students participated in the survey.

The rating represents HPU Dining’s best score yet, Summers said. HPU students gave the dining program a 99% satisfaction rating, which was 6% higher than the spring 2022 scores. Students rated the value of the dining at 98%, 5% higher than spring 2022 scores. The survey showed HPU’s top rated metric is its welcoming/friendly staff, who earned a 99% favorability score. Affordability was rated at 94%.

The Café at Slane Student Center is the most frequented on-campus dining location, according to 80% of student respondents. The Silver Line Diner and Chick-fil-A are the next most popular dining spots on campus with 37% and 36% of student votes, respectively.

HPU Dining employees celebrated their success at a team event in November with food and bowling for 25 of its managers, Summers said.