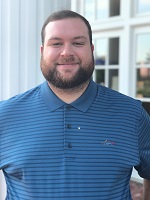 Matt graduated from High Point University with his B.A. in May of 2011 and followed up with his M.A. in May of 2012. He joined the School of Communication as an Adjunct Professor for Radio Practicum in the Spring of 2013 and now serves as the advisor for the student run radio station HPUR. By day, Matt is the Producer for the Greensboro based syndicated morning radio show Jared and Katie in the Morning, and serves as the Promotions Director for both WKZL 107.5 and WKRR Rock 92.

Matt loves the evolving industry of radio, and his station 107.5 KZL has been nominated for back-to-back national Marconi Awards for Radio Station of the Year in the CHR category. As a member of Jared and Katie in the Morning, Matt won Radio Show of the Year from the North Carolina Association of Broadcasters in 2017 for a large market station. Interacting with listeners and working to help positively impact the lives of those around him drives Matt in his work on a daily basis.

Matt enjoys interacting with his students inside and outside the classroom in the radio station. Radio Practicum cultivates creative, outside-the-box thinking that brings the information people crave on a daily basis to the public in a different way. His students become the host of their own weekly radio show where they play music, interact with listeners, and share stories about their life as a college student at High Point University.