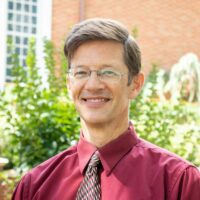 History of Theology and Ethics, especially ancient and medieval theology

Dr. Franks has taught in the department since 2003. His research interests focus on bringing the riches of Christian tradition to bear to address today’s questions about the shape of Christian discipleship, but extend to other areas of theology as well. His first book, He Became Poor: The Poverty of Christ and Aquinas’ Economic Teachings, was published by Eerdmans in 2009. His published work has also appeared in the Journal of Religion, Modern Theology, and The Thomist. He is an ordained minister in the Western North Carolina Conference of The United Methodist Church. He has served as parish minister of Methodist churches in Dinas Powys and Penarth, Wales. He is also an active member of Ekklesia Project, Society of Christian Ethics, and the American Academy of Religion. He enjoys biking, hiking, gardening, singing, and spending time with his wife, Sandy, and their five children.