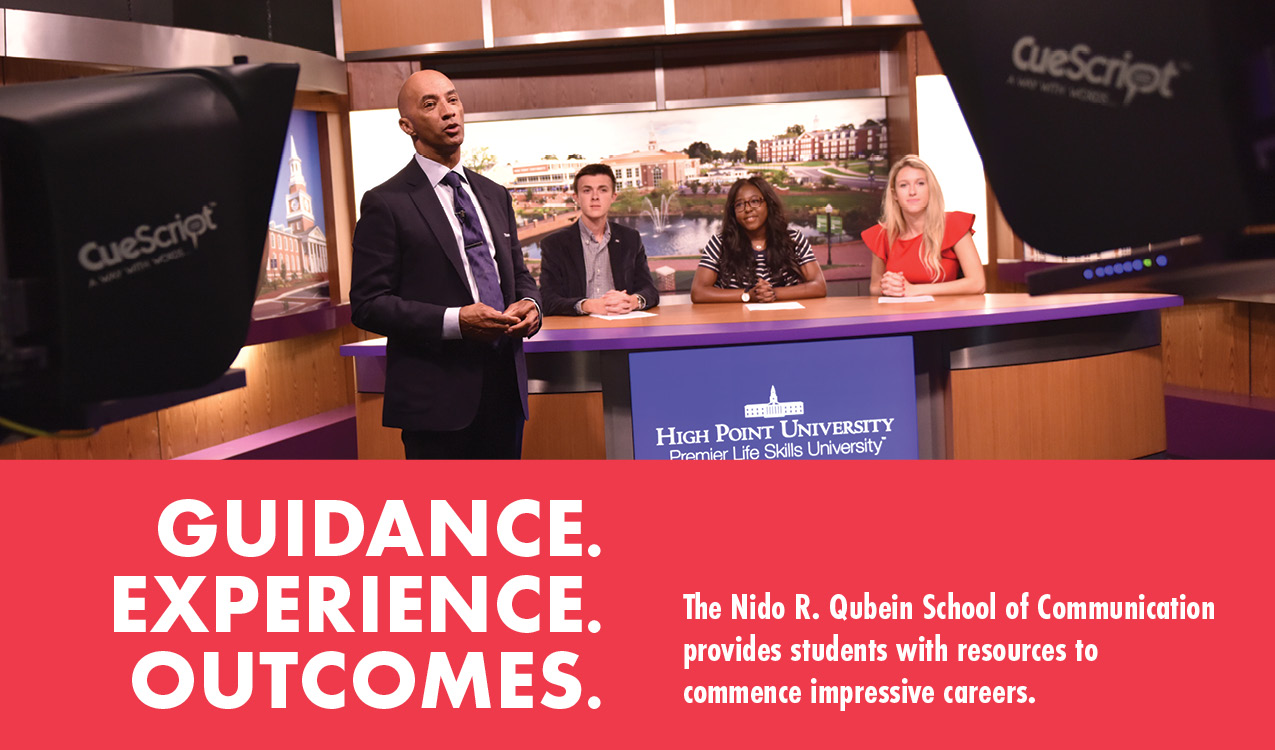 This story is featured in the Spring 2019 edition of the HPU Magazine. Discover below how HPU’s Journalist in Residence inspires and leads by example to educate students on broadcast news.

He approached the news desk inside the Nido R. Qubein School of Communication TV studio and leaned on the edge. He shook hands with the student anchors seated on the opposite side, introduced himself, got their names and dived into getting to know them.

He chatted with them about their experiences, their career goals and welcomed their questions. He only paused when the cameras began, and the student director gave him a wave.

Turning toward the cameras, he demonstrated how a journalist takes their cue.

The students at the desk were his audience — his mentees. Their mentor was an Emmy award-winning journalist. Pitts joined HPU as Journalist in Residence in 2018. Having covered national news stories and in-depth features for ABC, Pitts brings more than 20 years of experience into his mentorship role with HPU.

Sydney Goldberg was one of the student anchors who learned from Pitts. Later that day, she joined Pitts for lunch and took part in small group sessions with him.

A senior from Orlando, Florida, Goldberg listened to the stories Pitts has collected during his years of covering events such as the Boston Marathon bombing, 9/11 terror attacks and 2016 election coverage.

“Working with him, I learned the amount of hard work needed to become a successful journalist in the industry today,” says Goldberg. “Being mentored by Byron Pitts has enhanced my expectations for this industry and increased my admiration for the dedication it takes to provide a platform where citizens can become aware of what is going on in the world.”

Goldberg has already completed a successful internship with NBC’s Orlando affiliate WESH 2 News. She says that HPU gave her the skills to come into the internship prepared with top-notch writing, professionalism and vast knowledge of the newsroom. Working with Pitts furthered her confidence.

“I’m thankful to be at a university that allows us to learn and network with some of the world’s most influential journalists,” says Goldberg. “I will forever cherish the advice Mr. Pitts gave us for the rest of my journalistic career.”

Sitting alongside Goldberg at the anchor desk that day and also working with Pitts was Logan Carter. The TV studio is a space in which he’s both familiar and comfortable.

Carter is a senior sport communication major who, for the last year, has anchored a successful sports talk show called “Game of Inches” out of the School of Communication’s state-of-the-art TV studio.

He began his show under the guidance of HPU’s Broadcaster in Residence and former “TODAY” show Director Joe Michaels.

With more than 30 years of experience, Michaels has become a close mentor to many students, including Carter. He was the professor who initially encouraged Carter to create his own show and gave him the resources to pursue his entirely student-run program while supporting him where needed.

And this past year, Carter expanded his list of expert mentors thanks to opportunities provided by the School of Communication.

First was meeting Pitts. He encouraged Carter to pursue his dream and stick to his niche in order to succeed.

Next came Boston Globe sportswriter Bob Ryan, who joined HPU as Sports Reporter in Residence in the spring.

Carter has followed Ryan’s work since he was able to read, and this past year, Ryan made his way to HPU to work one-on-one with students.

“Meeting with professionals from the industry I would like to be a part of someday really aided me in knowing what it takes to achieve my goals,” says Carter. “Each and every visitor spoke with me about what I had done so far in sport communication, and all of them were so interested in my work. They took the time to look at my current coverage genuinely and gave me advice on how I could improve as well.”

Not only did they advise Carter on his current pursuits at HPU, but they also asked about his long-term goals and gave him check points for getting there.

“I don’t know of any colleges where students can sit down and speak with industry professionals like I have done in just this past semester,” says Carter.

Connecting students with industry experts isn’t the only area where HPU’s School of Communication excels. The school also boasts an innovative curriculum, providing students with the tools needed to advance in their fields.

More than half of communication comes from non-verbal cues: body language, eye movements, facial expressions and more. Now, HPU communication students can measure these cues in the newly-funded lab. Using the latest technology, students can test a person’s response to different messages and stimuli, such as tracking eye movement while looking at magazine advertisements to gauge their effectiveness. Becer’s time as a strategic communication major prepared her for an internship with Calvin Klein before the start of her junior year. Last year, she turned that internship into a full-time role with the company.

“The School of Communication taught me to work on cross-functional teams at all times,” says Becer. “Because of that, my communication level is at its best. Every class I took at HPU broadened my horizons and allowed me to see my true niche.”

The degree offers advanced courses and experiential learning to prepare students for successful and satisfying careers.

For the third consecutive year, the event management program has been named the best bachelor’s degree in the industry, winning the Haas & Wilkerson Pinnacle Award for Best Event Management Bachelor’s Degree.

Communication professors and event management majors who make up HPU’s student-run event club, Planning on Point, accepted the award during the International Festivals and Events Association (IFEA) conference in San Diego. The conference recognizes some of the world’s top festivals, events and educational programs annually.

“Our program is unique,” says Dr. Vern Biaett, assistant professor of event management. “We have created an actual bachelor’s degree in event management at HPU — not an emphasis or a few courses, but a full, 54 credit-hour degree. Our classes emphasize what the IFEA requires their Certified Festival and Event Executives (CFEE) professionals to know. And we are not done yet, with plans for future expansion on the horizon.”

Event management graduates go on to produce events within the public, nonprofit and private sectors, including weddings, conferences, festivals, sporting events and concerts.

Murphy DiRosa, a junior event management major from Easton, Pennsylvania, is president of Planning on Point. She understands the value of the hands-on experience the School of Communication and event management program provide.

“I’ve been able to hold leadership roles and learn to work with various groups,” she says. “Attending the conference allowed me to network with so many different people from the industry, creating lifelong connections. This program continuously prepares me for the future. With so many classroom and real-life experiences, I feel that I have learned — and am continuing to learn — the skills I’ll need to be confident in my career.”