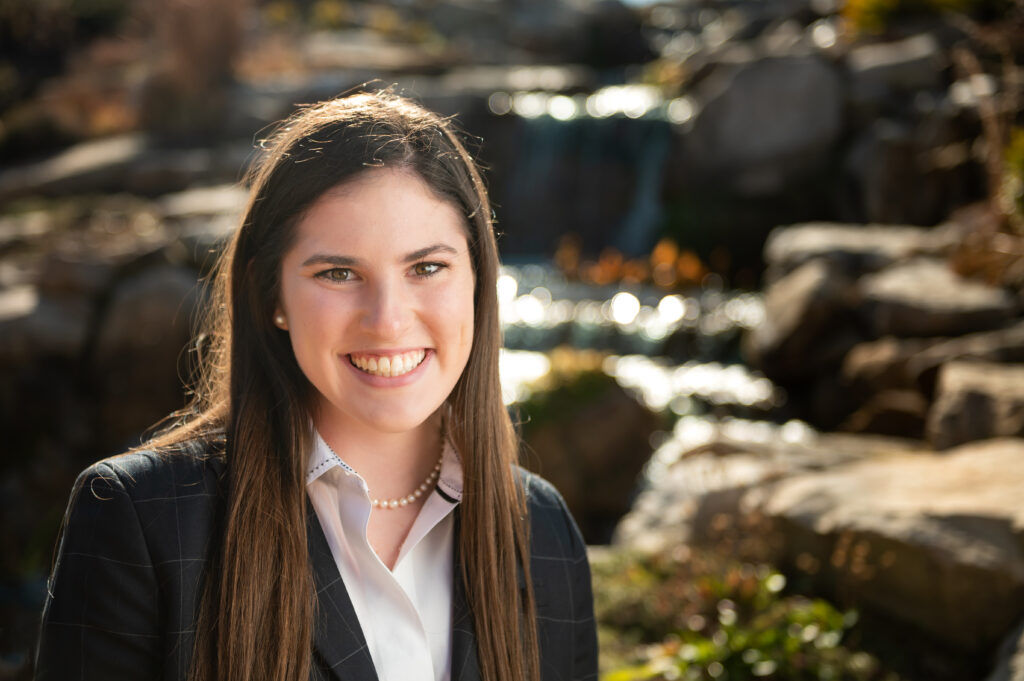 Lynch always dreamed of working in New York City. In this photo, she is 4, visiting the city with her dad and her brother, Michael, now an airline pilot. In the background of this photo is where she’ll work after graduation –– Rockefeller Plaza.

Rachel Lynch knew about High Point University long before she arrived as a freshman.

She kept HPU’s Daily Motivation calendar of quotes in her room as a high school student.

Eileen Lynch, Rachel’s mom, is a high school guidance counselor in Voorhees Township, New Jersey. The desk calendar came from HPU, and she gifted it to her only daughter, her youngest child.

Back then, Lynch was shy and insecure, after being immersed with what she calls the “comparative culture” she found during her 10 years of taking ballet. When her college search started, she wanted a smaller school with a good business program where professors would know her name.

She found that at High Point University.

Lynch is one of two Extraordinary Leaders for the month of December. She’ll graduate in May with degrees in accounting and start a job with Deloitte, one of the world’s biggest accounting firms. Deloitte offered her a job last spring before her internship with them.

Lynch, a Presidential Scholar and Business Fellow, is graduating a year early, and she’ll move to her dream city –– New York City –– and work at Deloitte’s U.S. headquarters in Rockefeller Plaza in Manhattan.

Lynch is no longer that shy, insecure dancer. HPU helped make that happen. Lynch poses with her parents, Eileen and Kevin, days after she first arrived at HPU.

When Lynch started visiting colleges, her parents told her she’d do well at HPU. But a family friend, whose son attends HPU, sealed the deal.

“She told me, ‘I think it would be a really good fit for you,’ and you know how it is,” Lynch says today. “You do listen to your parents, but when someone else says it, that’s how you are convinced.”

On her campus visit, after a nine-hour drive from New Jersey, Lynch met a security guard at the HPU Welcome Center within minutes of their arrival. The security guard noticed the car’s New Jersey plates and started a conversation.

Lynch discovered the security guard grew up 10 minutes from Voorhees.

Lynch’s first day on campus only got better.

Lynch found what she describes as a “contagious energy” that inspired her. She enrolled, and in her first week, she got up the courage to email Dr. Jim Wehrley, the dean of the Phillips School of Business. She asked if they could meet. He said yes.

She had intended to major in international business. Dr. Wehrley convinced her to major in accounting instead and told her how her decision could help her future. She left Dr. Wehrley’s office confident, more sure of herself. Lynch got involved with DECA as a high school sophomore.

As a high school sophomore, she got involved with the international student-led business organization because she wanted to be more outgoing and less shy. She also wanted a better understanding of business.

She comes by that curiosity naturally. Her dad, Kevin, is an accountant.

She held various leadership positions through DECA, earning more responsibility every time. By her freshman year at HPU, Lynch reached DECA’s highest office –– North Atlantic Region Vice President, a position in which she supported chapters in Canada, Germany and throughout the Northeast.

Her responsibilities included traveling to various places to speak. One of those places was Capitol Hill, where she advocated for DECA’s career and technical education. Lynch represented over 230,000 students worldwide. She felt the weight of that when she flew into Orlando, Florida, and met a fellow DECA member. “Are you Rachel Lynch?” the member asked.

Lynch was the face of DECA. She mentored fellow DECA students and helped them find their better self. DECA had definitely helped Lynch find hers.

Take what she did with Joseph Abboud, a well-known men’s fashion designer. Lynch has always wanted to merge her love for fashion with her penchant for business. As a high school senior, she met Abboud through DECA and later asked if she could job shadow him.

He agreed, and she spent several days over a six-month period with him in New York City. She accompanied Abboud during one of the city’s busiest times –– Fashion Week.

Once she came to HPU, Lynch realized what personal initiative can do. Lynch started playing baseball when she was 4. She kept at it. During her freshman year, she joined HPU’s Club Softball team along with her teammate, Hannah Sowers.

At HPU, Lynch has been inducted into three honor societies. She also was named the Outstanding Business Fellow her freshman year, and the next year, she received the Outstanding Sophomore Award from the Phillips School of Business.

“She is a serious student,” Wehrley says. “I was impressed that she reached out to me that early, and I perceived she’d become a student leader. She has.”

Lynch fields all sorts of questions as a University Ambassador when she takes families and prospective students on campus tours. One question she hears often is about how HPU alumni stay connected with the university and current undergraduates. She has an answer ready.

Even though she plays left field on HPU’s Club Softball team, Lynch doesn’t talk about sports. She talks about how alumni bridge the gap between students and HPU’s professional network.

“They’re sitting on the other side of the interview table, and they’re the ones who pass along our resume,” she’ll respond. “They’ll help put you on your path.”

Then there is Lynch’s work with Hillel, HPU’s Jewish organization.

She’s an executive member of the organization. Amy Epstein, HPU’s Jewish Life coordinator, connects Lynch with prospective Jewish families so she can answer their questions, too.

“I tell them every member of Hillel will see to it that their child will thrive at HPU,” she says. “A university is a place to celebrate differences and educate on different upbringings. Hillel is just one organization on campus ––– one of many –– that lives out that intention each and every day.” Lynch has been involved with HPU’s Alpha Kappa Psi since she stepped on campus.

Lynch has held various leadership positions on campus. But none taught her more than the position she holds this year –– chapter president of Alpha Kappa Psi, HPU’s professional business fraternity.

She had earned the fraternity’s Outstanding New Brother Award and Junior of the Year Award. But during the middle of last spring, when HPU students left campus and switched to online classes because of a global pandemic, Lynch faced a challenge.

As political and social unrest swept the country, Lynch knew she needed to get in front of an issue that had frustrated, angered and saddened her fellow members. On June 1, Lynch sent her members a six-paragraph letter. In part, she wrote: As the new president of Alpha Kappa Psi, Lynch gathers with her fraternity members in December 2019.

“We are a powerful brotherhood of change agents. Let’s be the example and positive light for other chapters around the country, and all of our student organizations on campus, to encourage diversity and difference among our brothers.

“Act and be heard in whatever capacity most appropriate for you with our core values in mind.”

That tense time has taught her much.

“To think quick,” she says. “To be versatile, not reactive but proactive. It was a real moment of maturity for me.”

The Feeling of Success

Lynch has a promising future in front of her, and it’ll start in her favorite city. But as she spends her last months at HPU, she can’t help but look back and think about what she’s gained.

There are the leadership positions. There are also the experiences. In October 2018, the university’s HPU in the City gave Lynch a close-up look where she always wanted to work.

In May 2019, she took a Maymester course on global business taught by Dr. Bob Hirth, HPU’s assistant professor of management. Hirth and the class traveled to Europe so they could see how international companies, both large and small, built their business.

In October 2018, she participated in HPU in the City. Dr. Doug Hall, then the assistant director of HPU’s Office of Career and Professional Development, accompanied Lynch and other students to New York City to see the New York Stock Exchange and the United Nations and visit companies such as Google and Bloomberg.

“You can talk the talk in your classes but until you get on the ground floor of places like Wall Street or BMW’s headquarters in Munich, Germany, you don’t forget that feeling,” she says. “That’s when you learn the most about yourself when you’re immersed in an unknown culture or an unfamiliar place. It’s unmatched.”

In three years, Lynch has taken advantage of almost every corner of campus, and she’s grown into the leader she knew she could be. She’s excelled in her classes and made the Dean’s list every semester. She also got her wish: Professors know her by name.

In October, he saw Lynch studying with a classmate on the second floor of the Wilson School of Commerce. He stopped and got her attention. He always loves joking with students he knows.

She laughed. But she had to finish a tax return assigned by HPU accounting professor Scott Davis.

And she knew she had to do well. 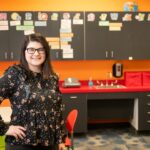 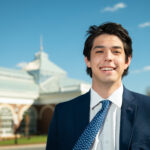