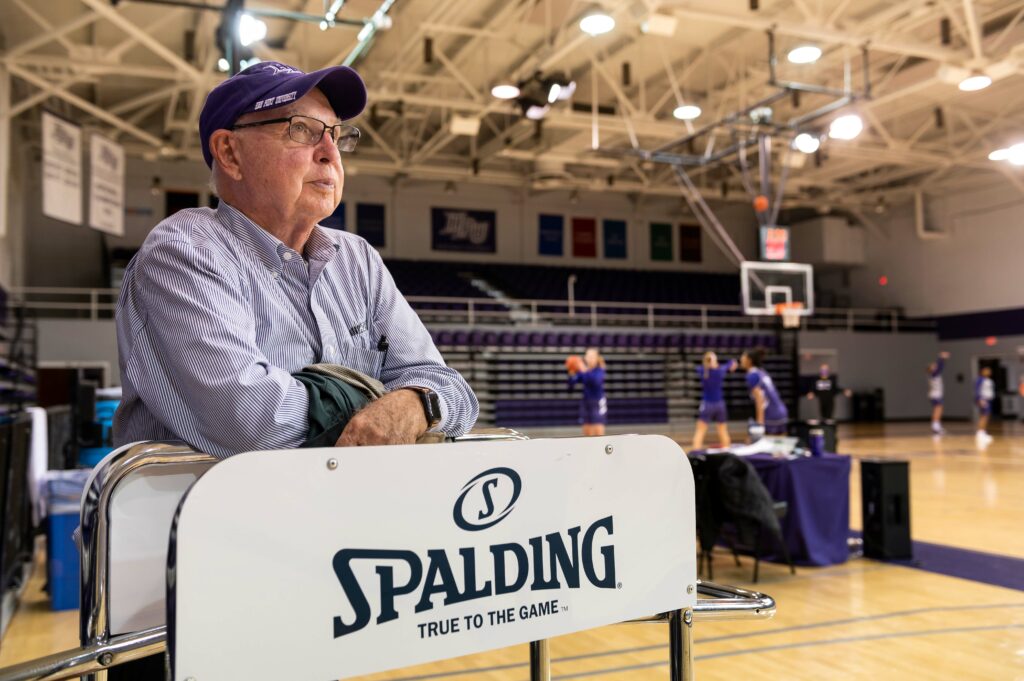 Rev. Richard Payne sparks up a conversation with junior Skyler Curran, a guard from Clemmons, North Carolina. He does that with every player he meets.

The Rev. Richard Payne always starts a conversation with whoever he runs into when he walks into the Millis Athletic Center.

He sees her in the hallway, the 6-foot-2 forward on HPU’s women’s basketball team. Deoul, from Washingtonville, New York, talks basketball and tells Payne of her potential career interest – using her criminal justice major to work possibly in prisons.

They soon head in opposite directions — Deoul down the hall and Payne into the gym to watch the men’s basketball team practice once again.

“That is what hanging out is all about,” Payne says. “It’s the listening to what they say, and you look for ways you can help them.”

Payne is a volunteer chaplain for HPU Athletics. Players and others on campus know him by his nickname. Payne spends six days a week on the HPU campus talking with athletes.

Payne became a volunteer chaplain at High Point University because he missed a basketball game – almost.

He and his wife, Toye, went to an HPU basketball game at Millis 13 years ago, and they couldn’t get in because the game was sold out. When they walked back to their car, Payne ran into a familiar face from the High Point YMCA — HPU president Dr. Nido Qubein.

“Where are you going?” asked Qubein, sounding puzzled.

“Wait a minute,” Qubein responded. “I have two. Sit with me.”

Richard and Toye Payne sat at center court, right beside Qubein. They later bought season tickets and watched games at home and away. Around 2009, Payne met Scott Cherry, the HPU men’s basketball coach at the time. Their conversation changed Payne’s life.

Around 2000, Payne had started working as the full-time chaplain for Richard Childress Racing, a NASCAR team based in Davidson County. When Cherry heard about Payne’s background, Cherry had a request.

“Will you talk to our team sometime?” Cherry asked. Payne, who grew up on a farm near campus, has started tending the community garden behind HPU’s Pro Bono Physical Therapy Clinic. Here, he’s with Gretchen Sanchez, the clinic’s administrative assistant. Says Sanchez: “He has essentially donated his time and resources to take the garden to the next level.”

For the past eight years, Payne has been the volunteer chaplain for HPU men’s and women’s basketball team and the volleyball team.

Since then, Payne comes to campus six days a week and talks to student-athletes. He talks to them as a team or by themselves somewhere on campus, and he gives them all his number if they need to talk.

“It’s not about me,” he says. “It’s the person in front of me. I don’t preach to them or hit them over the head with a Bible. I just plant a seed, and sometimes, I get to see it harvested.”

Three years ago, Payne recruited the Rev. Anthony Kindred to be the second chaplain for HPU Athletics. And last year, Payne began tending to the community garden behind the university’s Pro Bono Physical Therapy Clinic.

“I’m a farm boy,” Payne says. “I can’t go into something half-heartedly.”

He’s helped the clinic’s 13 beds grow everything from cabbage and broccoli to lettuce, cauliflower, bell peppers and greens. The garden he and his students tend stocks the clinic’s food pantry with healthy food for the clinic’s patients.

Then, last fall, Payne even got more involved with HPU. He’s one of the 10 new members appointed to HPU’s Board of Visitors. The board has 140 members, and those members are chosen because of their association with the university or their work and philanthropy in the community. With his work as a chaplain, a community garden volunteer and a member of the Board of Visitors, Payne keeps busy and helps him stay connected to a university he’s come to love.

His wife, Toye, graduated from HPU in 1975, he enjoys watching HPU athletes play, and he knows Qubein well. Plus, he’s used to listening to young guys at Richard Childress Racing and even young inmates in prison.

visor, founded the organization after his seven-month prison term for his crime associated with the Watergate scandal sparked his religious awakening.

Colson hired Payne in 1977, and Payne sees Colson as one of the most important people in his life.

And grow, they do. Junior Rob Peterson (third from right), a forward from Charlotte, North Carolina, has called the Rev. Richard Payne often for guidance. Says Peterson: “He’s that father figure away from home. He’s always there.”

Peterson is HPU’s 6-foot-6 junior forward from Charlotte, North Carolina. He met Payne as a freshman, and he saw how the team’s upperclassmen respected and approached him with their own problems.

Peterson began approaching Payne, too. Since then, he’s gone to church with Payne, and he’s called him often.

He’s talked to Payne about the difficulties of being a student-athlete –– juggling classes, going to practice, going to study hall, checking in with coaches, meeting with advisors, playing in games and staying away from the distractions of any campus.

His conversations with Payne helped.

“He listens,” says Peterson, a sports management major. “More than that, he has a lot of compassion for what we’re dealing with, and he’ll say ‘I know you’re feeling overwhelmed. Trust me, you’ll get through it.’

“He’s that father figure away from home. He’s always there.”

Deoul, the redshirt junior on the women’s basketball team, says Payne’s presence and conversations with players have helped bring the team closer. “Seeing his face makes my day, and it gives me this sense of comfort,” she says. “As every student athlete can attest, you’ll have had a bad class or a bad practice, and he’ll see you and say, “How’s your day going?’ That always makes you want to have a good day.”

Then there is Greyson Sundren, the junior exercise science major who works at the Pro Bono Physical Therapy Clinic. Among his responsibilities are pulling weeds and watering the garden plots. Every time he works, he sees Payne.

“When I met him, I knew he was a genuine guy,” Sundren says. “He gives you that feeling when you talk to him. He’s telling you how it is, and he’s being real. Those are the people you want in your life. They’ll be there for you and have your back.”

HPU’s Athletic Director Dan Hauser knows the relationships Payne and Kindred have with student-athletes is working. He sees it in teams’ growing leadership and the responses from anonymous athlete surveys and student-athlete advisory board.

“It takes a special person to care and pour out as many hours as they do,” Hauser says.

That’s the life of Preacher, a man who grew up close to the earth.

Visit his 90-acre farm less than 15 minutes from campus. It all becomes clear.

Payne’s driveway winds past two small scarecrows and a sign that reads, “Life Is Better on the Farm.” It ends nearly a quarter mile from the road at a one-story house with a stained-glass window of Jesus above the garage door. Payne lives on land his family has owned for the past 175 years.

Beside the garage, framed by two American flags, is a purple HPU flag. Chickens cluck, miniature donkeys amble in a pen nearby, and in a field beyond a gate grazes a lone cow named Beef.

Payne ambles by Beef, and points to a house through the trees.

“That’s the old homeplace,” he says.

Payne’s family has owned this land for 175 years, raising tobacco, cows and pigs. He grew up on this land, and at 73, he can walk through the pasture and see God at every step. When he heads over the campus, he sees hope with every student he meets.

“It’s like what John F. Kennedy said: ‘Ask not what your country can do for you, ask what you can do for your country.’ Students are getting those values at High Point University,” he says. “It’s a God, family and country school, and I know Dr. Qubein will keep it that way.”

Students see Payne as an easy-going man full of wisdom and full of stories.

Just look at his life. “We go at such a pace that sometimes we need to look back at what God has done.”

Payne joined the U.S. Navy after graduating from high school in 1965. Three years later, he found himself in Vietnam as part of the Navy’s Construction Battalions, known in military shorthand as Seabees, clearing land and building pontoon bridges for American soldiers.

When he came back, he wandered. He grew his hair to his collar, attended the famous Woodstock Music Festival in 1969 and attended college on the G.I. Bill.

In 1972, when he graduated from college, he managed a Holiday Inn and met a college freshman who worked as a desk clerk. That desk clerk became his wife.

When the summer ended, Toye went back to college in Raleigh. Their relationship blossomed. Payne proposed Christmas Eve, and on a Saturday in August, they got married in Toye’s home church, Green Street Baptist.

Toye transferred to then-High Point College and finished her math degree, and Payne left managing a hotel to selling real estate. He did really well, and his life revolved around boats, cars and nice houses. “I am thrilled at what God is doing in these students’ lives. It’s amazing. And it’s at a university that allows them to grow.”

But Payne felt, in his words, “empty.”

Then, in 1977, a friend asked Payne to join him at a minimum-security prison farm. He wanted Payne to help him talk to prison inmates about their faith. There, Payne felt full.

“I felt completely free,” Payne says today. “I was around inmates scrambling around in a kitchen, pans were rattling, someone was washing dishes in the back, and I kept thinking, ‘This is real.’’ I came home and told Toye, “Something’s happening.’”

That “something” led Payne to a divinity degree from Shaw University and a long career of helping inmates and ex-felons with their walk of faith. He started locally in High Point and went statewide with the Department of Corrections before Colson discovered his work.

Now, because of a request from a coach, Payne follows his own faith at HPU. 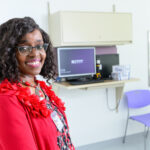 A Moment with HPU’s New Medical Director: ‘They Are Our Children, Too.’ 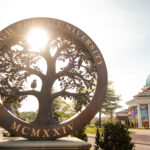 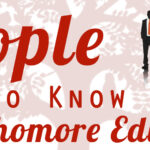 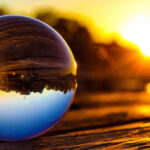