Class of 2021 Outcomes: Leah Hershberger Decides on the Walt Disney

Class of 2021 Outcomes: Leah Hershberger Decides on the Walt Disney 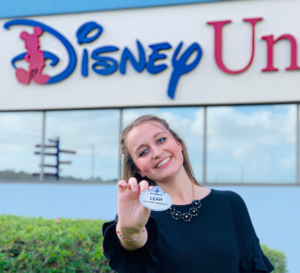 With another Commencement behind us, High Point University graduates will be commencing prestigious career paths around the world at Fortune 500 companies, international service programs, public school systems, top-tier law, medical and graduate school programs, and many other esteemed organizations thanks to their journey at HPU. Here’s a glimpse of one extraordinary senior from the Class of 2021:

Post-graduation plans: Hershberger will be returning to Walt Disney World to join the Disney College Program.

How HPU helped you get there: “I have always wanted to work for the Disney company in some shape or form (specifically ABC Studios working as an editor). my professors and success coaches throughout the years always encouraged me to apply for the Disney College Program as a way I get a foot in the door since Disney can be very competitive with particular doors, so that is exactly what I ending up doing! I used the Office of Career and Professional Development as a way to find internships and jobs in my hometown during summers. They make everything so easy and are there to help students every step of the way.”

Most impactful mentor at HPU: “My most impactful mentor at High Point University was Jim Scott. Professor Scott would always tell his students that each of us was going to be successful in whatever we chose to do in life. He constantly encouraged us to go out in the world and pursue a career in something that we enjoyed doing and when I told him that my dream was to work for the Disney company he always believed in me and knew that it would happen for me one day. I have also had him as my professor many times throughout my four years and I have learned so much in every single one of his classes that I will take with me in my future endeavors.”

Advice for underclassmen: “Get involved as soon as you can! Don’t be afraid to sign up and partake in all of the amazing opportunities that HPU has to offer. I remember signing up for so many clubs at the involvement fair at the beginning of my freshman year and I am so grateful that I did!”

Are you an HPU graduate with an exciting job or graduate school offer?
Share your news with us for a chance to be featured!