The Glover Family Collection of Literary Masterpieces at Smith Library

The Glover Family Collection of Literary Masterpieces at Smith Library

If you have visited Smith Library recently you wouldn’t have been able to miss the newest donated collection, a generous gift of nearly 500 beautifully-bound Easton Press volumes arranged in an impressive glass-front lighted display case of elaborately carved oak. The books were donated by the Glover family (Elbert, Penny & Paris) from an extensive personal collection. The display case itself was also a gift to the university. 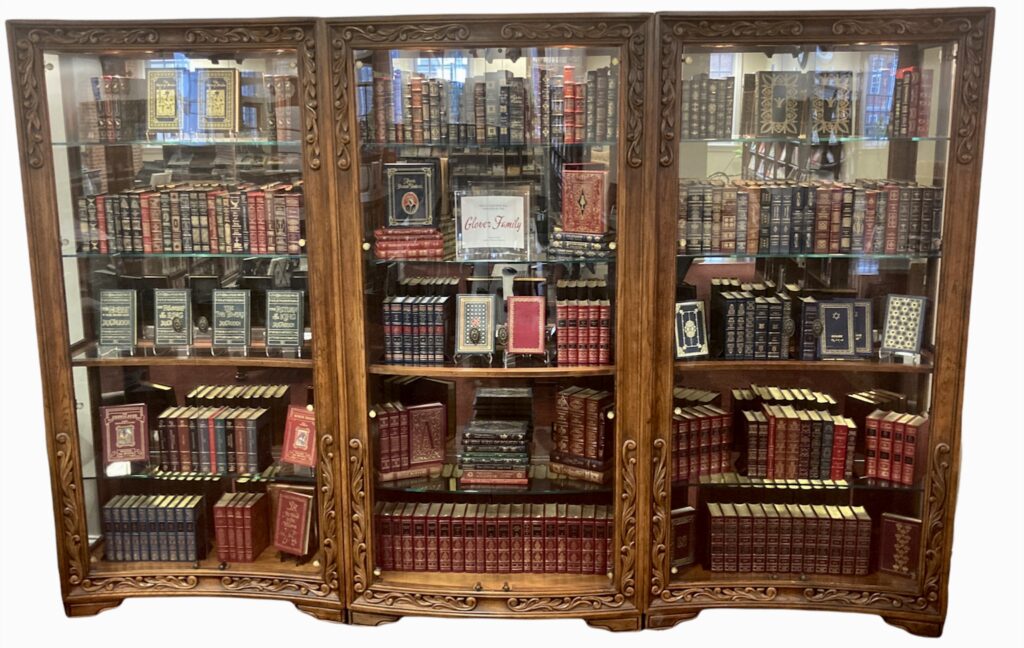 The books are leather-bound deluxe editions of well-known literary classics, featuring 24k gold lettering on the cover and spines, gilded edges, beautiful end-papers and a sewn-in satin ribbon bookmark. The books are cataloged with Library of Congress call numbers but are arranged according to the series in which they were released by Easton Press. Some of the notable series in this donation are described below.

The top left side of the display features books from the Masterpieces of Fantasy series, which was printed between 1996 and 1998 to showcase fiction titles in the fantasy genre considered modern classics. This series is distinguished by its elaborate cover and spine designs, a special endpaper printed with unicorns, a series-specific bookplate and insert describing the title. Face-out titles in this display include the well-loved Lord of the Rings series by J.R.R. Tolkien, and a two-volume set of The Mists of Avalon by Marion Bradley, of which the first copy is personally signed by the author. Other signed editions in this set include Sword of Shannara by Terry Brooks and Pawn of Prophecy by David Eddings.

See this post on the Beautiful Books blog for a wonderful synopsis (including a video tour!) of this series.

Below the Masterpieces of Fantasy is a shelf housing 12 editions of beloved classic adventure novels, all beautifully illustrated (even on the cover!) by American illustrator N.C. Wyeth. This series includes Westward Ho! by Charles Kingsley, The Mysterious Island by Jules Verne, The Boy’s King Arthur by Sidney Lanier, Drums by James Boyd, The Deerslayer by James Fenimore Cooper, The Last of the Mohicans by James Fenimore Cooper, Rip Van Winkle by Washington Irving, Kidnapped by Robert louis Stevenson, Treasure Island by Robert Louis Stevenson, The Black Arrow by Robert Louis Stevenson, Robinson Crusoe by Daniel Defoe, The Scottish Chiefs by Jane Porter, Robin Hood by Paul Creswick, and The White Company by Arthur Conan Doyle.

Myths and Legends of the World 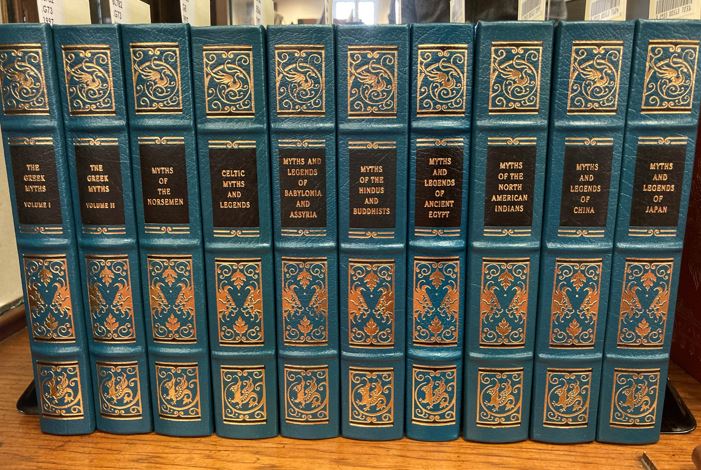 On the bottom left shelf is an extraordinary complete set featuring myths and legends from various locales and time periods, bound in a beautiful deep teal leather with black labels, gilded lettering and flourish detail on the spines. Each features a full page glossy color frontispiece. The set includes Greek Myths Volume 1, Greek Myths Volume 2, Myths of the Norsemen, Myths of Ancient Egypt, Myths of Babylonia and Assyria, Myths of Hindus and Buddhists, Myths of China, Myths of Japan, Celtic Myths, and Myths of the North American Indians.

The Novels and Short Stories of John Steinbeck 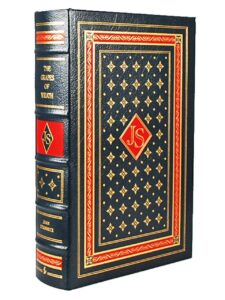 John Steinbeck (1902-1968) was a much-beloved American author best known for his “Dust Bowl” novels including Grapes of Wrath and Of Mice and Men. He authored 33 literary works in his lifetime, winning several prestigious awards including the National Book Award, Pulitzer Prize, and ultimately a Nobel Prize for literature in 1962. This elegantly-bound set in navy blue leather trimmed in gold and scarlet red features eight of Steinbeck’s masterpieces, including East of Eden, Of Mice and Men, Tortilla Flat, The Pearl/The Long Valley, Cannery Row, The Grapes of Wrath, The Winter of Our Discontent, and The Red Pony.

The Complete Novels of Jane Austen 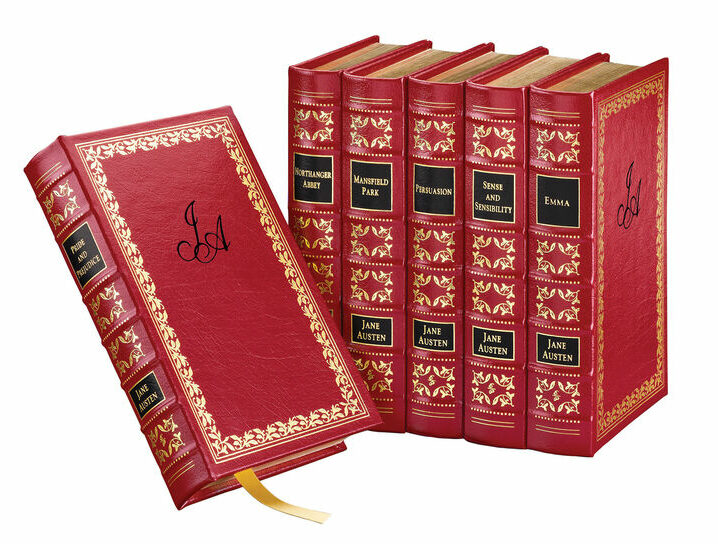 Most of us know Jane Austen as the author of Pride and Prejudice, but in fact the English Novelist wrote five other notable novels during the period from 1797-1817, including Emma, Persuasion, Sense and Sensibility, Mansfield Park, and Northanger Abbey. Though published anonymously and unknown in her lifetime, the popularity of her novels exploded toward the end of the 19th century as (in addition to their literary merit) they offered scathing insight into the society of the landed gentry during the British regency period. This elegant set of Austen’s life’s work is bound in red leather with a gilded border on the cover encasing the initials “JA” in black script. The spines feature gilded designs as well the title and author name on a black label background. Across from the title page is a print of the original watercolor illustrations contributed by C.E. and H.M Brock.

The Novels of Charles Dickens

Occupying the center bottom shelf anchoring the display is a robust matching set of classic works of Charles Dickens shelved in alphabetical order.

Other books in the middle section of the display include many literary masterpieces from Famous Editions, Collector’s Editions, Great Books of the Twentieth Century, and 100 Greatest Books Ever Written series, most of which are also classic literature. The right side of the display contains mostly non-fiction titles, including several World War II related volumes from The Library of Military History, biographies from Great Lives and Library of the Presidents, and the complete set of The Life of Winston S. Churchill. 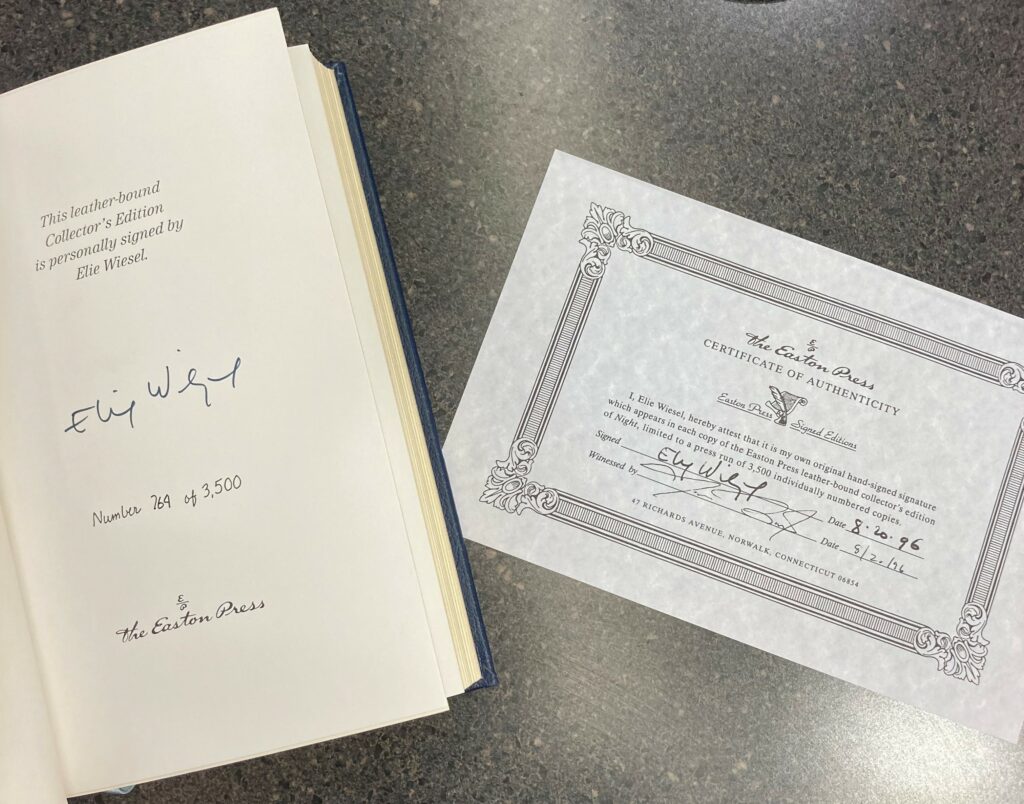 The donation also notably includes several volumes personally signed by the author, each with a certificate of authenticity. These include The Civil War: A Narrative 3-volume set by Shelby Foote, Years of Renewal and White House Years by Henry Kissinger, Pawn of Prophecy by David Eddings, A Night to Remember by Walter Lord, Magician Apprentice by Raymond Feist, Sword of Shannara by Terry Brooks, The Mists of Avalon by Marion Bradley, War’s End by Maj. Gen. Charles W. Sweeney, The Chosen by Chaim Potok, Exodus by Leon Urik, and Night by Elie Wiesel, pictured here.

This was such a generous donation that the case can only display about half the volumes at one time. Also included in this donation but not yet on display are:

Click here for the full catalog listing of titles in this donation. Needless to say, this collection will be prominently displayed in the new library as well and remain a part of HPU Libraries’ special collections for generations.