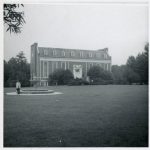 In the early 1900s, advocates for the creation of what would become High Point College were men and women of the Western North Carolina Conference of the Methodist Protestant Church who wanted a new church-sponsored college and citizens of the city of High Point who wanted a college for their seemingly ever-growing town. The commonly quoted version of the College’s history can be found on the University’s website and states: “[the Annual Conference] accepted an offer from the thriving city of High Point to contribute 60 acres of land and $100,000 to the project. Classes began in September 1924, even as the finishing touches were still being added to the original buildings.” This is an accurate account but does not touch on the Methodist leadership’s lengthy debate preceding the opening of this new college.

These campus histories detail the development and early years of High Point College:

by Richard B. McCaslin