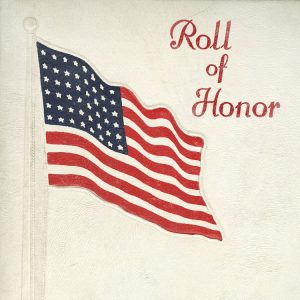 Numbers at a glance:

World War II disrupted every aspect of American life. Young, able-bodied men and women who would have attended High Point College were instead called upon to contribute to the war effort. In the years leading up to the war there was a civil air patrol training center on campus and classes were held in navigation and aeronautics. The decline in college enrollment during the war years, however, was tremendous. High Point College was no exception, with enrollment dropping to a low of 280 in 1943.

This all changed in February of 1943 when the 326th College Training Detachment arrived by train and marched to campus. Housed in McCulloch Hall they trained, marched, and went to school. By the end of the war the school had seen 753 cadets that earned college credit by taking five months of classes, and later many returned to finish a degree at HPC. The college also served as an observation post in the early 1940s. Training and sightings were done from the Roberts Hall tower—if a specific type of Airplane was spotted, spotters or students were told to call the command center at the airbase in Raleigh.

Of the 495 students that went to war, 270 were from the city of High Point, 334 were from North Carolina, 161 were students from other states, 3 were women and 32 were killed. After the war, the Alumni Association compiled three volumes aptly titled Roll of Honor to recognize and document the contributions of individual HPC students and alumni, some of whom made the ultimate sacrifice for our country.

These books are in remembrance of their service.