If you were to see a tornado approaching, you would have limited time to make important life-or-death decisions. Knowing the basics of tornado safety, planning ahead, and participating in tornado safety drills lowers the chance of injury or death if a tornado were to strike our community.

Tornadoes are nature’s most violent storms. Spawned from powerful thunderstorms, tornadoes can devastate an entire neighborhood in seconds. North Carolina averages 16 tornadoes each year with peak activity in May; however, there is no true “tornado season” in NC. Tornadoes are most likely to occur between 3 PM and 9 PM but can occur at any time. Because conditions can deteriorate so rapidly, being aware of the adverse weather will greatly improve your safety.

A TORNADO WATCH means conditions are right for the development of a tornado or severe weather. During a watch, members of HPU should be alert to possible changes in weather conditions.

A TORNADO WARNING means that a tornado or severe weather is occurring or has been sighted or indicated by National Weather Service radar. 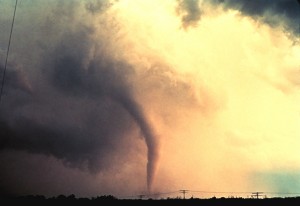 Seek immediate shelter if any of the following are encountered:

What to Do During A Tornado Warning:

IF YOU ARE OUTSIDE DURING THE WARNING:

If you cannot get to a safe shelter, lie down flat in a low area such as a ditch away from trees with your hands covering the back of your head and neck.

HOW HPU WILL COMMUNICATE WITH YOU: